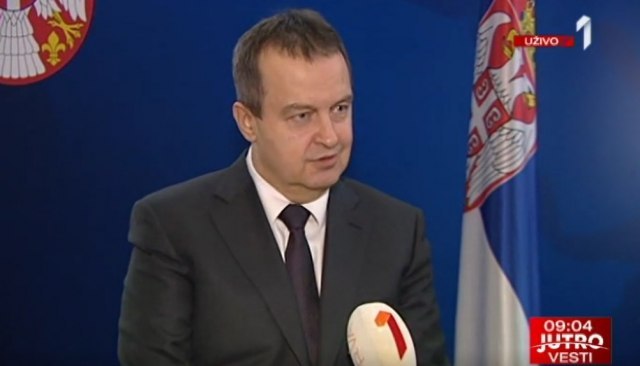 Asked how Haradinaj came up with that claim, Dacic, the Serbian foreign minister and first deputy PM, said that it was "above all a great surprise that the text has been published at all, because the pen is not the tool Haradinaj uses."

"Somebody wrote it for him," Dacic told Prva TV early on Thursday.

"He led the KLA ("Kosovo Liberation Army") and murdered people, he is free because of lack of living witnesses that he has in the meantime killed. Now he's making up reasons to justify the situation he is in, and that is that they have fallen into the quicksand, and the more time passes, the more statements they make, the deeper they sink," he said.

Asked to comment on another interview also given to US media by Kosovo President Hashim Thaci, and who said there would be "no agreement between Serbia and Kosovo without defining the borders," Dacic pointed out that "we have one dilemma - are Thaci and Haradinaj really in conflict or is it a game."

"There is information that (Thaci) had persuaded Haradinaj to impose taxes of 100 percent (on Serbian goods), while he allegedly only wanted 30 percent," Dacic said and reiterated that Serbia does not want to make the situation more tense.

Speaking about today's meeting of representatives of the Serb List (from Kosovo) and the president of Serbia, but also about the next moves of Serbia, Dacic said:

"We are waiting to see how long this therapy will last... The diagnosis is difficult, it takes that long for the drugs to work. They'll hardly change their decision so easily. They actually put a foot in the door with the desire to take up a new political space - let's start from here, the taxes are now 100%," said the minister.

These are bluffs and they will not pass, Dacic said, adding: "If they cannot discipline Pristina, then what should we talk about?"