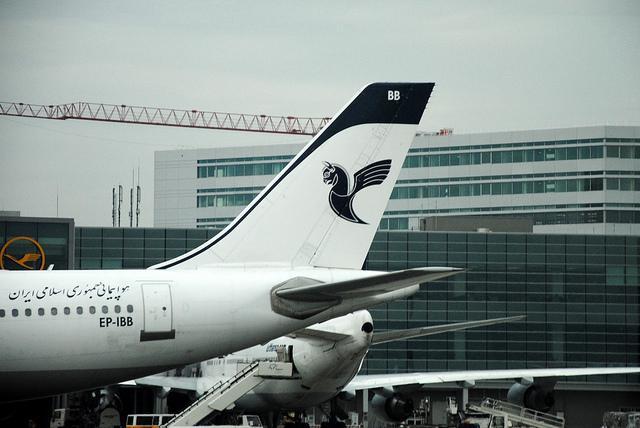 1998
I worked as a flight attendant with the national airline company Iran Air. I graduated from an excellent school in Teheran, knew English well, so I got employed. I went through training and started flying. First on destinations inside Iran, Teheran- Tabriz. After a year I started flying to Beirut. And then after few years to Kuwait. It was alright. The job wasn't too hard and I enjoyed working. Yes, sometimes you have to wake up early and sometimes wait for a long time, but it was alright. I lived in the Northern part of Teheran and was taking care of my parents who were both chronically ill. When I was away because of work my sister would do it with her family.

2006
Eight years later my life changed. It was when I started flying to Europe with my crew. I became a cabin senior and I was responsible for everyone on board. At first I flew Teheran- Frankfurt for a long time. And then two years later I started flying to London. People sometimes think that life of a flight attendant is exotic, but it's actually very demanding and at the same time monotone. Once I waited for 16 hours at the airport with lost Kurdish girl until her parents showed up. I tried to understand her. The girl was 6 years old. I didn't have children and I was thinking what it would be like to be a parent. It wasn't easy because it was a temporary guardian role. So she left, she lost everything in the war and who knows what was happening in the neighbouring Iraq; she was trying to seek asylum with her parents in Great Britain. I thought about that episode for a long time.

2008
Throughout the years, I have seen many people fleeing their home countries. Everyone is trying to reach Europe. Every flight is runaway flight. For me and for others. Do you know that we have to wear scarves on the plane? It's a part of our uniform. I am against it. I was looking at the photographs in our office from 30 years ago and was so proud of our company's history. Uniforms were pretty. Simple. Women with make-up. Without scarves. It's different now. After every take-off I would move my scarf little by little and by the time we landed in London I wouldn't be wearing it any more. I watched women on the plane. They were, by codex, supposed to be covered, too. But as we would approach Europe, all of them would move a line a little bit. These lines are strange. Where hijab starts, and where burka ends. They no longer exist in my mind. Actually, they never did, but I had to watch out not to lose my job. We could never know who was flying and for what purpose. Police was everywhere covered up not to be recognized.

2010
We landed in London on July 5. That afternoon we were to return to Teheran. We had a permission to land but it seemed that we couldn't refill the fuel tank at the airport and continue back. Iran was under sanctions because of nuclear weapons. Great Britain didn't allow us to take their fuel to go back. That was the first moment I wished not to return home. A day later, Europeans closed their gates for our planes. We couldn't travel to Europe any more. I never understood politics and my colleagues from the cabin were saying that politics is everything, especially the air traffic. I accepted that politics is everything and I don't have to explain it further because I should tell you my story.

2012
I was in Belgrade for the first time in 2012. Iran Air somehow flew to some European cities and we were filling the fuel tanks outside the EU so we were landing in Belgrade. It's strange how someone who flew across most of the world, actually doesn't know it. I didn't now much about Belgrade until we started staying overnight in between shifts. That's where my story begins. I didn't plan on leaving my job, nor my mother, but something told me I should stay here. I felt like I was beginning to understand that I want to stay here. I didn't know how to explain that feeling but it started growing. I went back to Teheran but I stopped loving my life there. My parents were gone, I was alone and I was feeling enormous pressure in me and on me. I wasn't feeling good in Iran.

2014
One of my friends "ran away" to Belgrade, as she says. She got married and has a family now. I would see her from time to time. She talked to me. She came with a degree. A dentist. And she didn't work a single day at the clinic. No one wanted to employ her. Everyone saw her as a refugee. Someone who doesn't have a country. Even though she was married and had a Serbian last name, even though she had kids and some peace, she was not a part of the community. We always talk about it. But she says that the most important thing is that her husband and kids love her.

2017
The news is that Serbia abolished visa for Iranian citizens. More and more Iranians are going to Europe every day with no return. They fly to Belgrade and from there continue further to Europe. I know this because I work with these people. I left Iran 2 years ago. I do humanitarian work and help refugees and migrants. I translate. I help organizations in the field. I am a refugee, too. That is my role. That is how I see things.

I'm not a daughter, nor wife/woman, nor friend, nor a flight attendant. I'm a refugee.