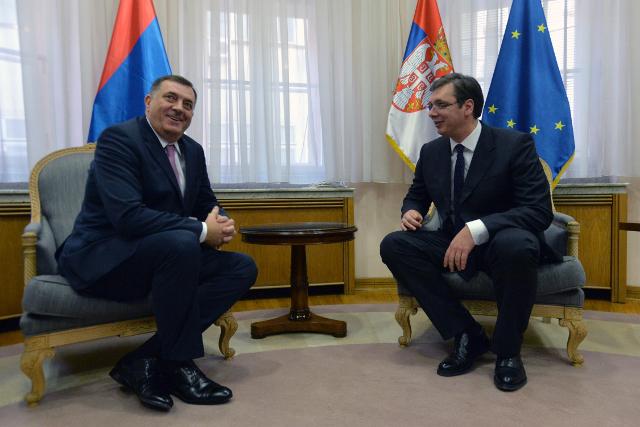 Dodik told Vucic that the situation in Bosnia-Herzegovina is "very complex and complicated" while "the Serb nation is under constant pressure from some representatives of Western countries, especially the U.S. smbassy, but also from the Bosniak leadership that does not shy away from comparing the RS with terrorism as the greatest scourge of the modern world."

The Serb entity "feels threatened, and the Serb people disadvantaged in the Federation of Bosnia-Herzegovina," Dodik said, referring to the Muslim-Croat entity in Bosnia Herzegovina,

Vucic said that Serbia’s greatest interest lies in "stability in the region and good relations with neighboring countries."

"Serbia will, in accordance with the Dayton Agreement, but also because we belong to the same people, help and support the survival and prosperity of the RS and will not allow its existential endangerment," Vucic said.

Serbia respects the territorial integrity of Bosnia- Herzegovina, but the integrity of the RS also must be respected, Vucic concluded.