The UN has formed a team for the evacuation of civilians from Mariupol, said the deputy official representative of the UN Secretary General, Farhan Haq. As he stated, the conditions for evacuation from "Azovstal" have not been provided yet.

The fiercest battles are being fought in Mariupol around the "Azovstal" ironworks. The UN is preparing to evacuate civilians from the ironworks.

The most severe attack on Azovstal was carried out

A Ukrainian official in Mariupol told CNN that the Azovstal Steel and iron Works was hit by the heaviest Russian air strikes so far.

"Last night, the factory was hit by the strongest blow so far. First there was a mass air strike with seven Tu-22M3 planes. Then there were more than 50 air strikes. Apparently Su-25 or Su-24 were deployed. I can't identify because we were in a shelter. The bombing was carried out at the place where the seriously wounded are - in the hospital", said Mikhail Vershinin, the head of the Mariupol patrol police, who was in Azovstal during the airstrikes.

About 100.000 inhabitants remained in Mariupol, and they are in "mortal danger" due to unhygienic and medieval living conditions, the city council announced.

There is a risk of diseases such as cholera and dysentery due to unhygienic conditions, it is added. 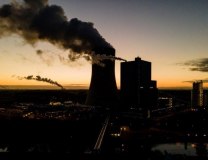