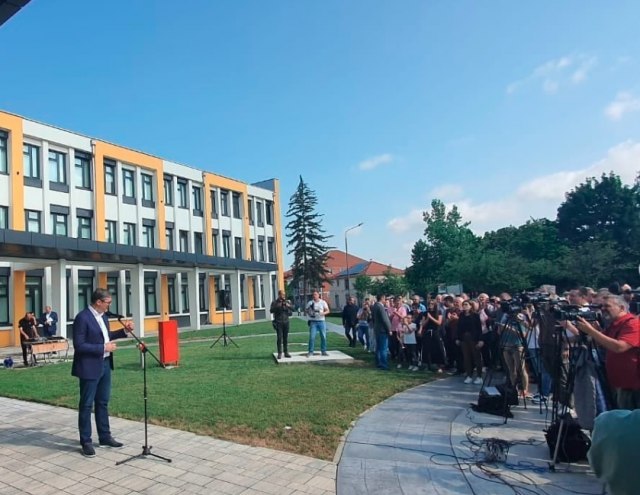 According to the agenda, Vučić first visits Despotovac, where he visits the Technical School, as well as the Health Center, including Manasija Monastery. The President will then visit the Hotel "Biogor" in Paracin, in the settlement of Sisevac.

Vučić started his visit to the municipality of Despotovac by visiting the reconstructed Technical High School, for which the Government of Serbia set aside almost RSD 400 million. President Vučić was welcomed in front of the school by the heads of the municipality and employees of the school, as well as the citizens of Despotovac, to whom he told that several things would be done in their city.

"Thank you for every form of support. The times are not easy ahead of us, but as we have managed to be among the most successful in the economy so far, I am sure we will continue with that pace," Vucic said.

The management of the school informed the president about what has been done in the school in the past few years and showed footage of the building before and after the reconstruction. The director of the school, Dobrica Stojanović, told Tanjug that the first phase of works, worth 137 million dinars, was completed in 2019 and that hydro and thermal insulation, LED lighting, replaced roof, repaired floors and walls, renovated facade with thermal insulation were done, which would, as he says, improve the energy efficiency of the facility.

Also, there is a school kitchen in which students majoring in cooking and waitressing, obtain necessary practical skills. "Within the second phase, last year, we built a biomass boiler room, which cost more than 200 million dinars," said Stojanović. He adds that the plan is to build a student dormitory and a gym with an indoor pool, within the third phase of construction works. The works on the reconstruction of the school were financed by the Government of Serbia through the Office for Public Works Management.

The technical school is currently attended by 274 students of technical, electronic, commercial, culinary and tourist professions. By the way, during his visit to Despotovac, President Vučić will also visit the Health Center, and then the Manasija Monastery.

Vučić will then visit the Hotel "Biogor" in the settlement of Sisevac at around 11.30 a.m. in Paraćin. After that, in the municipality of Rekovac, he will visit the House of Culture, as well as the "Lastar" Winery.

Earlier, the President of Serbia announced that he would find time, as soon as in July, to visit several districts, in order to talk to the citizens.