Vucic and Dodik on Dayton Agreement: "No changes without consent of Serbian people" 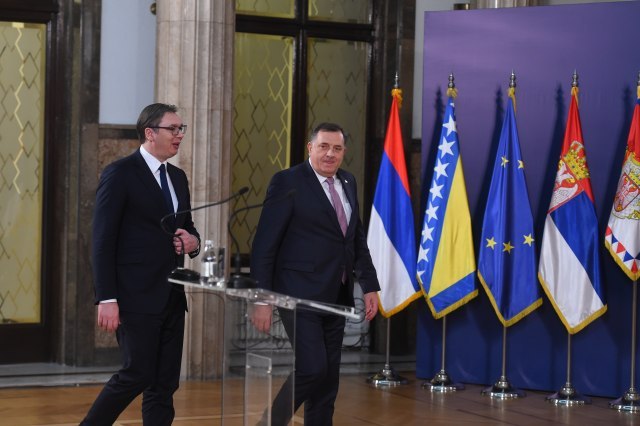 Vucic said at the press conference after the meeting that many topics were discussed and stressed that "the urgent need of the Serbian people, wherever they live, is to preserve peace and stability and our main goal is to enable that political stability and peace".

The President of Serbia said that one of the topics was the Dayton Agreement.

"The Dayton Agreement is of great historical importance, because it was the only possible solution in which everyone lost and gained a little, so only such an agreement could preserve peace in the territory of Bosnia and Herzegovina. Serbia will respect what the Serbian people, especially in Bosnia-Herzegovina, decides. No new plans and ideas can be implemented without the consent of all three nations", Vucic emphasized.

When asked if Serbia and RS have a plan if talks on the Dayton revision are intensified, and whether Croatia has the power to raise the issue of the Dayton Agreement being revised, and whether it is in her interest, Vucic said that he did not want to interpret their interests, but that he wants to notice, as someone who is familiar with the situation in the region fairly well, that it would not be in Croatia's interest.

With regard to the Croatian people, the priority interest for them is to respect the Dayton Agreement, as well as for the Serbs, maybe even more to the Croats. I do not see what kind of interest they would find leading to the abolition of the rights of peoples and entities, but I do not rule out the possibility of them interpreting it differently”, he explained.

We want RS as an entity within Bosnia-Herzegovina, he emphasized, full respect for the Dayton Agreement, and any amendments and changes to it must get the consent of the Serbian people and the RS.

Vucic pointed out that it would be better if no one was trying to get into it or impose anything.

President of Serbia said he respected Zagreb's choice to appoint Hidajet Biscevic as the new Ambassador of Croatia to Belgrade.

Vucic stated that he would "quickly" give credentials to the new Croatian Ambassador to Serbia.

Hidajet Biscevic is the first Croatian Ambassador to the EU and former Secretary General of the Regional Cooperation Council.

He graduated political science in Zagreb, was acting in the capacity of Editor-in-Chief of Zagreb's "Vjesnik", and later Croatian Ambassador to Turkey from 1993 to 1995 and to Russia, from 1997 to 2002.

According to Belgrade media, he was a close associate of the first Croatian President, Franjo Tudjman.

Dodik said that "Serbia is the guarantor of the Dayton Agreement".