Thaci describes latest meeting in Brussels: "Worst one yet"

The president of Kosovo's provisional institutions, Hashim Thaci, says the meeting with the Serbian president in Brussels was "the most difficult in six years." 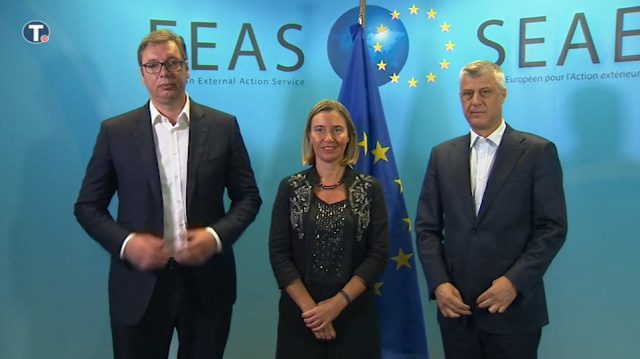 Thaci spoke in the presence of EU foreign policy chief Federica Mogherini - who mediated the meeting - to tell reporters on Wednesday that the dialogue round was "difficult."

"This was the worst meeting that has been held with Serbia in the last six years," Thaci said.

He explained that Aleksandar Vucic and he first discussed with Mogherini "the European future of Kosovo, normalization of relations and reaching a final agreement with Serbia."

"The final agreement should be for the sake of good neighborly relations, peace and stability in the Balkans and integration into NATO and the EU. After that, we held a meeting at the presidential level. It was short, not easy, the shortest and the worst of all the meetings we have had in the past six years," Thaci said.

Nevertheless, Thaci said that he "continued to see the light at the end of the tunnel" - although, "it will be extremely difficult."

"Serbia continues to see Kosovo as part of its territory. President Vucic and Serbia must understand that Kosovo is a sovereign state. We will work to reach a final agreement that will be good for both countries, but there will be even greater difficulties in the coming days and months," he concluded.