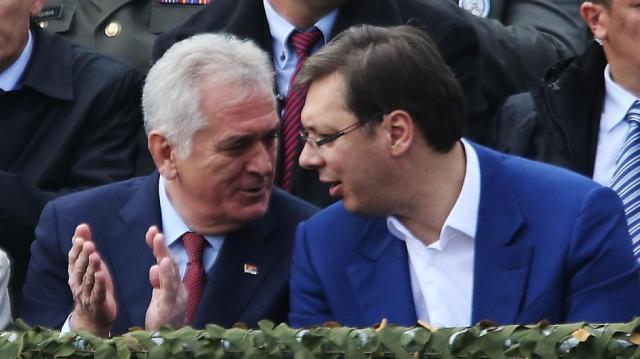 In a statement carried by the Belgrade-based tabloid Kurir, Nikolic said: "We have agreed to continue to lead the state together. We will talk about (state) positions after the victory in the (presidential) elections. We will continue to lift Serbia off its knees together. Aleksandar will be the presidential candidate," Nikolic said.

A statement on the Serbian government's website, entitled, "Unity of state leadership in solving key issues," posted after the meeting on Monday, reads as follows:

"Serbian President Tomislav Nikolic and Prime Minister Aleksandar Vucic talked today about the political and security situation in the country and the region.

According to a joint statement, the President and the Prime Minister fully agree that Serbia is facing serious challenges, which require a joint and comprehensive response from the state leadership.

The unity of all state officials in resolving regional problems and avoiding a widest scale crisis are priority tasks of both President Nikolic and Prime Minister Vucic.

The President and the Prime Minister agreed on the measures and actions regarding a genocide lawsuit of Bosnia-Herzegovina against Serbia, as well as regarding the defence of vital national interests of Serbia in the case of proposal for membership in UNESCO and the Council of Europe of the so-called state of Kosovo. It was agreed to make daily coordination on these key issues for Serbia.

The two officials described their cooperation to date as important and successful for Serbia and agreed to work closely in the future, reads a joint statement by Prime Minister Aleksandar Vucic and President of the Republic of Serbia Tomislav Nikolic."

Earlier in the day, B92 learned unofficially from circles close to the former SNS party leader that he will most likely not be a candidate in the upcoming presidential elections.

B92 was told that this decision should be confirmed during the day, after Nikolic and current SNS leader and Prime Minister Aleksandar Vucic meet.

Earlier in on Monday, B92 was told by sources close to Nikolic that his meeting with Vucic was expected during Monday, and that there had been contacts between the two during the previous days, which went in a "reconciliatory tone."

Nikolic told Kurir on Saturday that he still expected to make an agreement with Vucic, while the prime minister stated during the day that he would talk with Nikolic "whenever, and about whatever topic" - but that he would does agree to "the public imposing a reality show."

"Politics is not about trading," said Vucic, and added, "I am not a tradesman and I won't take part in a media reality show."

Sources from his cabinet have denied for B92 and other media outlets and agencies that Vucic and Nikolic spoke on the phone ahead of the meeting of the main board of the SNS on Friday, which confirmed Vucic's presidential nomination.