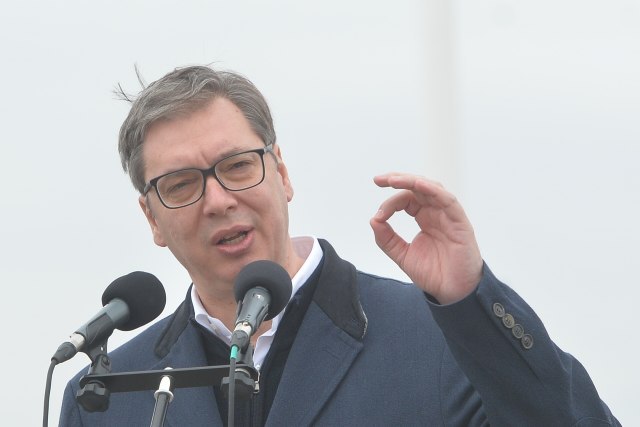 "Imagine that the ambulance is prevented to pass... We want to behave democratically and that has a price. We have to endure the terror of the minority from time to time. We have to show good will. My advice is to let them do what they want... So that people can see the difference between those who work and build and those who do not work", said Vučić.

"There is so much revolt of people because they worked hard in the previous days. In the end, things are decided in the elections... It shows how immature people are and that they are under significant influence from outside, as well as criminal structures...", the president stated during the visit of works on the project of building infrastructure and filling the plateau for the Belgrade metro depot on Makiško polje.

He pointed out that the attacker on the excavator in Sabac worked for Cume's and Kelmendi's company.

Vučić condemned the insult of the vice president of the Party of Freedom and Justice (SAA), Marinika Tepić, on a national basis.

After visiting the works on the construction of the depot for the Belgrade metro in Makiško polje, Vučić accused the SAA official of being a "liar" and that "there is no thing she didn't do against our state", but also assessed that it was a shame that someone attacked her because she belonged to another nation.

"I absolutely condemn anyone who addresses insults on a national basis. I adore Romanians, and Ukrainians, and Bosniaks, and Hungarians, and I do not allow anyone to attack someone because they are of Romanian or Serbian origin. I will always, everywhere, everywhere, disagree with that, and condemn every hate speech and point out the arguments that someone is this or that because he belongs to a certain nation", Vučić said.

Vučić commented on the incident in Šabac.

"The only thing that stunned me was the fact that Zelenović was standing three meters away.

Zelenović was standing, watching, not moving and not trying to stop the beating. If someone attacked someone now, I would run to stop it... I was shocked...", President of Serbia stated.

He pointed out that the protesters brought heavy machines to block the bridge, and explained that the driver of the excavator went his own way and that he did not break any law.

Vučić once again called on the police not to react to the demonstrators until they "beat people" or "attack institutions".