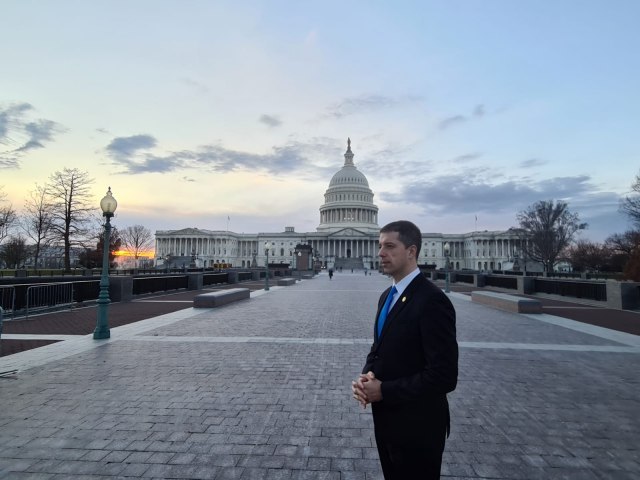 Serbia is sincerely committed to opening an entirely new chapter in the relations with the United States and that commitment of ours is not determined by specific appointments in the White House or political composition of the key U.S. institutions, the newly-appointed Serbian Ambassador to the United States Marko Djuric said in an interview for Politika.

What kind of cooperation do you expect with the new administration?

We are open to friendly cooperation and building bilateral relations with all democratically elected officials in the United States. When it comes to President-elect Biden, he is a man who is very well informed about the situation in our region and is aware of the broader context of relations in the Balkans. I will also remind you that President Biden was our guest in Belgrade not so long ago, which is the only such case in the recent history of Serbia-U.S. relations. In the previous years, the Serbian President Aleksandar Vucic maintained excellent personal relations with members of the Congress and politicians from both parties. He has known President-elect Biden for a long time and every meeting they had that I attended was excellent. I expect that on the U.S. side we will find equal interest in further improving relations between Serbia and the United States through the existing and possibly some new frameworks of cooperation.

What will be your priorities as Serbian Ambassador to the United States?

I am in the United States, among other things, to convey that Serbia today is a story of success, recovery and rising from the ashes because we want America with its companies, innovations, scientific community and even certain values, to be part of that recovery. Next year, Serbia and the United States will mark 140 years of diplomatic relations. During that period, we mostly had relations that can be described as friendly. We were allies in two world wars, and our countries have been based on the same or very similar core values since the beginning of their modern statehood. America as we know it today was built by so many famous Serbs, and a large number of our compatriots still live there today, so that we can also talk about the Serbian contribution to building the American dream.

How would you describe our relations with the United States?

Our relations are deep and emotional, and as with any emotional relationship, we have had our ups and downs. I want to say that it is natural for our relations to be very good and friendly, and I will work on that with dedication, as I will do everything to make ordinary American people better acquainted with Serbia and Serbs, so that we can, I hope, once and for all close all dark pages of our still relatively fresh history. After all, everyone here respects the economic results of our country, which holds the top position in terms of gross domestic product growth at the time of the pandemic. Even the lobbyists of other sides are counting on the fact that they cannot push Serbia today as they did in the past.

It has been speculated that Madeleine Albright could get involved in the Belgrade-Pristina dialogue?

Serbia is not in a position to choose who to talk to. Our commitment to dialogue is sincere and consistent, and is not based on emotions, but on a rational understanding of our state and national interests. From the question of who will specifically take part in the dialogue on the U.S. side, the far more important question is whether Serbia and the United States today have a greater capacity to identify common interests and build a partnership than they did two decades ago. The world has changed substantially in the past twenty years, and I hope that in the new geopolitical context, our two countries will be ready and able to rearrange their mutual relations in a way that will open prospects for a safer and better future for the citizens of Serbia and our entire region. We will certainly insist on cooperation and mutual respect at the same time.

As the Belgrade-Pristina dialogue continues, can we expect the United States' pressure on Serbia to increase?

International mediation in resolving frozen conflicts is a euphemism for pressure. Pressures have always been part of the dialogue between Belgrade and Pristina. If international pressures are exerted in order to increase the dynamic of the process of normalization of relations, this coincides with Serbia's interest in permanently eliminating the sources of instability in our region so that we can generate joint economic and social development with even higher intensity and accelerate the European integration process.

However, if the pressures are there to impose some solutions that are not a result of compromise and true reconciliation, this cannot make anyone happy in the long run. I believe that there is an interest at the international level to resolve the problems between Belgrade and Pristina, and we are the constructive side here, because in order to achieve regional stability, which is important also for the perspective of future generations in Serbia and the economic progress, it is our interest to have a stable and secure Balkans.

The Community of Serb Municipalities is just a precondition for the process to continue, not a concept that will permanently satisfy Serbia

The Community of Serb Municipalities has been one of the key issues in the dialogue with Pristina so far. As someone who played an essential role in these negotiations, do you expect that it will finally be formed in the foreseeable future?

You are right. The Community of Serb Municipalities is the key element of the First Brussels Agreement. Everything that was agreed in that document should be seen in the context of the Community of Serb Municipalities, because the agreement was conceived as a compromise in which both Belgrade and Pristina would make a gesture of good will and a step forward that could lead us to some new agreements at some point in the future. In that context, Pristina has expressed its readiness to compromise but only declaratory. However, in practice it has shown for years now that it does not care about compromise.

It would be irresponsible on our part if, despite all our readiness to seek solutions in Kosovo and Metohija by peaceful and political means, we make some significant new steps before Pristina confirms that it is a credible interlocutor and fulfills what it has committed to. I have to emphasize that the Community of Serb Municipalities is currently a necessity and a precondition for the continuation of the normalization process, but not a concept that will permanently satisfy Serbia and Serbs in Kosovo and Metohija if there is an opportunity to discuss a more permanent and comprehensive solution.