PODGORICA -- Priests and monks led by Metropolitan Amfilohije and Bishops Joanikije and Metodije had gathered in front of the Parliament of Montenegro, singing prayers

PODGORICA -- Priests and monks led by Metropolitan Amfilohije and Bishops Joanikije and Metodije had gathered in front of the Parliament of Montenegro, singing prayers 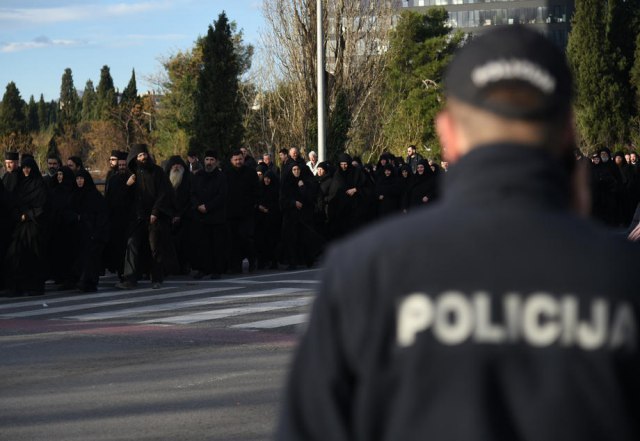 A legislative committee session is being held today in the building, on which the Government's Law on freedom of religion is on the agenda.

The Legislative Committee of the Montenegrin Parliament endorsed the majority vote by the government's Law on religious freedom.

Members of the ruling majority in the Montenegrin Parliament supported the proposed act, while members of the opposition Democratic Front (DF), Veljko Vasiljevic and Milun Zogovic, voted against, Podgorica-based Vijesti reported.

Bishop Metodije has read the proclamation of the Council of the Serbian Orthodox Church in Niksic that was held on Saturday, accusing the Montenegrin government of trying to “steal” the Church’s property through a new law on religious freedom that threatens to legalise the discrimination of church positions in the country. Protective fences were erected in front of the Parliament building and police forces were present. The assembled priests sing prayers.

Montenegrin "Vijesti" states that about 600 priests and monks are expected.

Thereafter, a Holy Liturgy is held in the Temple of Christ's Resurrection.

"If the laws of modern times are not in harmony with the laws of contemporary world, then these laws are not the laws of true Montenegro, but they can turn into lawlessness. We ask MPs not to allow this shame and embarrassment. In particular, we appeal to the Muslims and Roman Catholics to prevent anyone from manipulating them on the basis of a previously signed contract, by claiming that this law does not apply to them", Amfilohije said in a speech.

After their protest outside Montenegro’s parliament to demand a controversial religious law be withdrawn, Serbian Orthodox bishops and priests headed to the Church of the Resurrection in Podgorica for a service.

The parliamentary Legislative Committee is now discussing the law. pic.twitter.com/9HQKxJZyn6