BELGRADE -- After four years, Slavica Burmazovic hugs her children she has not seen since 2015 when their father abducted them and took them to Turkey

BELGRADE -- After four years, Slavica Burmazovic hugs her children she has not seen since 2015 when their father abducted them and took them to Turkey 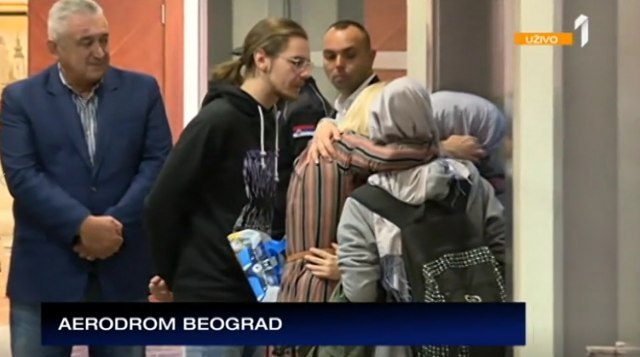 Two girls, aged 15 and 14, as well as a boy of eight, were brought to Serbia by the Serbian Ambassador to Iran because this was the only possible way, since the children did not have proper documents or exit visas. Serbian Foreign Affairs Minister Ivica Dacic said that was the only solution.

The youngest child, a boy, speaks Serbian poorly, but he was in a good mood as he sat with his sisters and mother in a special section of Nikola Tesla Airport, while numerous journalists and photo-reporters recorded the first shots of the mother's encounter with the abducted children.

They landed at Belgrade's Nikola Tesla Airport by Qatar Airways shortly after 10 a.m. "Today is the first day of the rest of our life together, we are so happy", their mother, Slavica, told Tanjug before the plane landed.

She expressed hope that no such thing would ever happen to any mother.

The meeting was very moving, and Minister Dacic also managed to answer a few questions posed by the journalists with tears in his eyes. Slavica says she is grateful to Minister Dacic and Serbian Ambassador to Iran Dragan Todorovic for accompanying her children and taking them safely home.

Four years after the abduction and more than three years after the Turkish court's final ruling, following an agreement between Minister Ivica Dacic and Iranian Foreign Minister Mohammad Zarif, the children were allowed to return to their mother Slavica Burmazovic,

Prva TV reported on this case on several occasions.