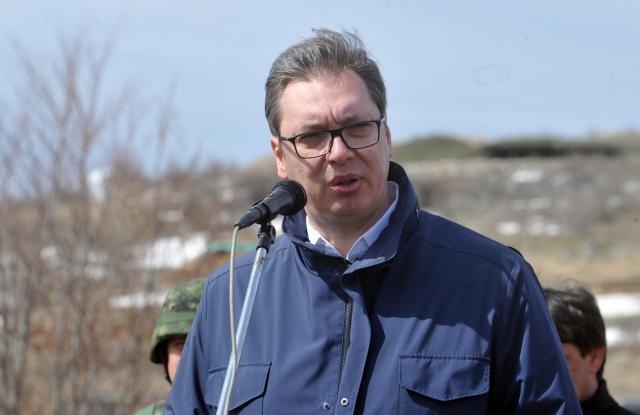 "I don't know to tell you if we'll continue discussions with Pristina, because I don't know myself how (we'll proceed)," said the president.

But he added that negotiations will be taking place - and that he told international officials "to let a little time pass, then he'll see."

Vucic also said that "everyone should be clear that Pristina is not deciding on everything by itself - instead, that is done by the sponsors of its independence."

When asked by reporters about his conversation with Russian President Vladimir Putin, Vucic said he was bothered by some media who criticized him for it.

"I understand nothing any longer," Vucic continued. "My job is to speak with everyone and inform everyone about the situation in Kosovo and Metojiha, and seek answers."

He added that it was "difficult to speak with someone who is a sponsor of Kosovo's independence, and that's the United States."

"They don't hide it, either, they're proud of it, the same as some (other) Western countries. When you talk to them you see that Albanians are allowed to do anything," Vucic said, and added:

"God forbid if we battered any Albanian, nobody in the world would save us. That would be top news, we would have been denounced, branded... This time, they looked to pass over this."

"I find that hypocrisy of theirs disgusting. When they have no courage to say what kind of decisions they made in 2008, they call out both sides," Vucic said.

"I have the courage to tell that to everyone's face. My job is to protect Serbia," he added.

According to Vucic, "Western leaders get terribly irritated when they are shown the papers - with the exception of Mogherini who had the courage to immediately come to Belgrade."

"When they are shown the papers about the papers that have been sent, sent three times, when they see there's been no reply, when they don't know what to say to you - then they say, 'well we must move past this now'," the president said, apparently referring to the correspondence between Belgrade and Pristina prior to Djuric's trip to Kosovo - and Pristina's claim that he was arrested because he entered the territory "without permission."

Vucic also said that Serbia "wants to safeguard peace - and that is our most important goal" - but added that "everyone wants us to accept blame for something that we didn't participate in."

Vucic made these comments after attending a military exercise staged at the Pasuljanske Livade Range by the 4th Army Brigade, the Airborne Brigade, and the Special Brigade.

The drill scenario that Serbian soldiers today trained for concerned "a group of rebels attempting to carry out secession of a part of the state territory."