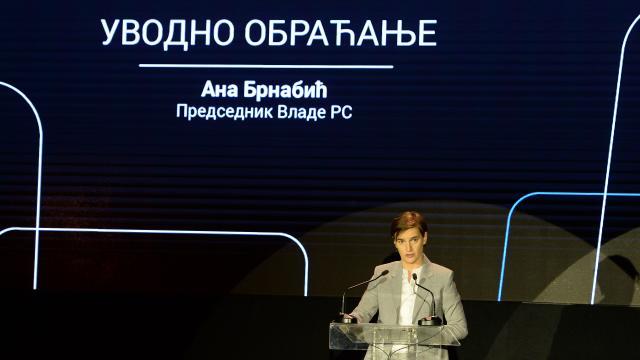 The conference was organized by the Office of the Prime Minister of Serbia, as the first step towards systematic support to the faster development of this sector.

Brnabic stressed that the best way for Serbia to keep up with the Fourth Industrial Revolution is to recognize its potential and opt to support the economy based on knowledge, innovation and creativity.

I sincerely believe that the combination of digitization, creativity and science is a recipe for faster development of both society and the economy, she underlined.

At the very beginning of the conference, the Prime Minister promised that the Serbian government will work on improving the business framework in this mandate so that the creative industries reach their full potential and achieve even faster growth.

According to the report of the World Bank presented at the conference, the creative industries in Serbia represent a great economic potential - employing more than 100,000 people, of whom about 70 percent are between 25 and 44 years of age, and a large number is women.

These industries have recorded a steady growth of 6.4 percent annually over the past three years and generate revenues of approximately €4.7 billion, representing 13.5 percent of national GDP.

Creative industries are one of the fastest growing industries in Serbia and contribute to GDP more than some traditional sectors of our economy.

If we support it in the right way, this sector offers us the opportunity to create even more highly-paid jobs, encourage the development of small and medium-sized enterprises, prevent the brain drain and raise the competitiveness of our economy, Brnabic said.

The Prime Minister highlighted the importance of creative industries in building a positive image of Serbia as a creative, innovative and digital country, which is a desirable environment for domestic and foreign talents, and at the same time an attractive destination for investors and tourists.

The conference brought together a large number of experts from various fields of creative industries, such as Lazar Dzamic, Ivana Medenica, Tijana Palkovljevic Bugarski and Biljana Srbljanovic, as well as organizations such as EXIT and Beerfest and creative spaces like Nova Iskra and Mokrin House.

The participants in the conference discussed some of the current challenges and limitations faced by individuals and organisations operating in this sector.

During the conference, attended by more than 250 participants, including ambassadors and representatives of international organisations and the media, special attention was devoted to cultural diplomacy and the ways in which Serbia can capitalize on its creative potential for re-branding on the world stage.

Minister of Education, Science and Technological Development Mladen Sarcevic said at the panel on creativity and education that by introducing project teaching into the curriculum for the 1st and 5th grade of primary school, we aim to encourage the development of creativity and analytical problem solving.

Through this kind of education, our children will be ready to take responsibility and initiative and develop an entrepreneurial spirit, Sarcevic added.

By investing in creative industries and improving the financial and legal framework, reforming education, supporting creative association initiatives, and similar initiatives, Serbia invests in a different future for the generations to come, giving them new chances for competitive business and a better quality of life.