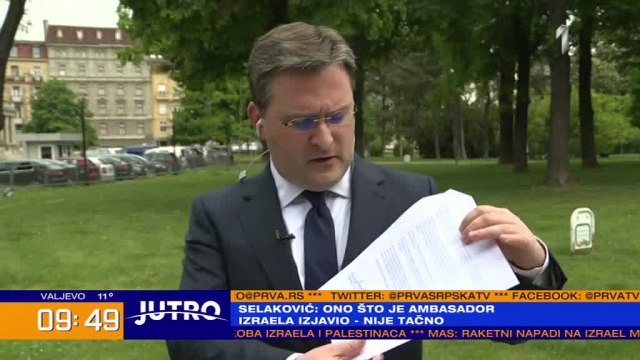 During his guest appearance on the morning program of TV Prva, Israeli Ambassador Yahel Vilan was asked why his country recognized the so-called Kosovo, he claimed that Israel did it because it was under pressure from America. Those two sentences immediately provoked reactions from the host who printed out the agreement and showed it live.

First, the study shows the agreement signed in Washington, i.e. in the White House and in the presence of the then U.S. President Donald Trump, and from which it is clear that Pristina and Belgrade signed two different agreements with Washington, parts of which are not the same.

The Minister of Foreign Affairs of Serbia, Nikola Selaković, was also contacted, who confirmed that the President of Serbia, Aleksandar Vučić, signed a completely different paper from the one given to the Pristina side for signature.

"The statement of the ambassador of Israel is rather rude, and it is absolutely not true," Selakovic said categorically. "It is clear that Serbia has signed an agreement with Washington, as well as the so-called Kosovo, separately. The part signed by Vucic states that Serbia agrees to open a representative office in Jerusalem by September and move its embassy in Israel to that city.

The part signed by Avdullah Hoti states that Kosovo agrees to demand mutual recognition of Serbia and the so-called Kosovo", explained Minister Selaković, but added that Vučić told Prime Minister of Israel Benjamin Netanyahu that the condition for Serbia to move its embassy and open a representative office was for Israel to withdraw recognition of Kosovo.

Commenting on the statement of the Israeli ambassador from the Morning Program that Israel practically recognized the so-called Kosovo under pressure from America, Selaković then concluded that President of Serbia managed to survive that pressure in Washington, which, as he says, was fierce.

"Vucic endured the horrible pressure to which he was exposed, and Israel failed to resist those pressures," he said, adding: "The citizens of Serbia should be proud to have a president who managed to resist the pressures in Washington and preserve Serbia's integrity and our national reputation".