Russia requested an urgent session of the UN Security Council

Russia has requested an urgent session of the United Nations Security Council due to sabotage on two forks of the Nord Stream gas pipeline. 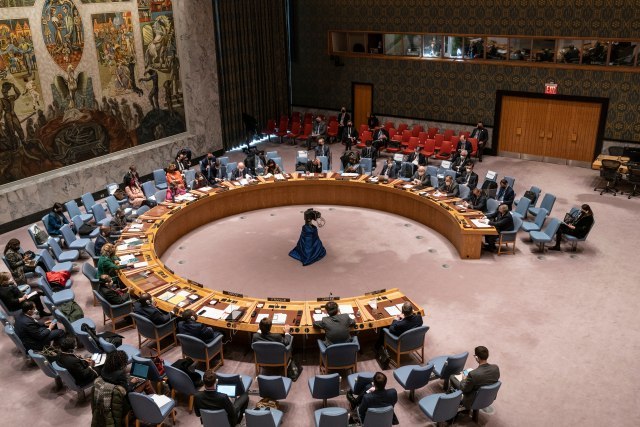 This was announced by Russia's First Deputy Permanent Representative to the UN, Dmitry Polyanskiy.

"We expect the session to take place tomorrow," Polyanskiy wrote on Telegram.

Previously, the spokeswoman of the Ministry of Foreign Affairs of Russia, Maria Zakharova, announced that Russia intends to convene an official session of the UN Security Council regarding the provocations against the Nord Stream and Nord Stream 2 gas pipelines.

Two undersea leaks that began in the Russian-owned Nord Stream gas pipelines on Monday were likely caused by powerful underwater explosions, according to Swedish and Danish seismographic data.

It is "very clear from the seismic record that these are blasts," Björn Lund‬, director of the Swedish National Seismic Network at Uppsala University told NPR in a phone interview. "These are not earthquakes; they are not landslides underwater."

German and Danish officials said both the Nord Stream 1 and Nord Stream 2 pipelines showed sudden losses of pressure late Monday, which they said could only be caused by a leak from large holes in the pipelines.

Neither of the pipelines are active, as Russia has cut gas deliveries in them, but both were filled with natural gas when the drop in pressure occurred. Russian energy giant Gazprom, a state entity, owns a controlling interest in both pipelines.

Danish authorities reported the location of the Nord Stream 1 leak as northeast of the Baltic Sea island of Bornholm, and the Nord Stream 2 leak as southeast of the island. German media, quoting unnamed security officials, say it's possible the leaks are a result of an act of sabotage, as it's extremely rare for undersea, concrete-coated steel pipes to break on their own.

Speaking on Tuesday, U.S. Secretary of State Antony Blinken acknowledged the possibility that the damage to the pipelines was deliberate, then added: "If it is confirmed, that's clearly in no one's interest".

Denmark's prime minister says it is "hard to imagine" that the leaks detected on Nord Stream 1 and 2 pipelines were "accidental." pic.twitter.com/MSAxf7xq3X