Putin and Lukashenko: "We will win!"; "Let them run away" VIDEO 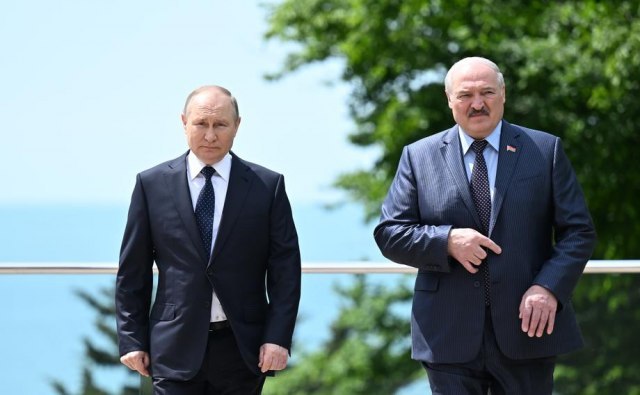 "The official part of the meeting has just begun," a source close to the press service of the Belarusian leader announced to the Telegram channel "Pull Pervogo" along with footage from the meeting between the two leaders.

He said this at a meeting with the President of Belarus, Alexander Lukashenko, which is being held in Sochi.

"They should treat us with respect," Putin said, commenting on Lukashenko's words that Minsk will not talk to the West if there is no respect.

Lukashenko emphasized that Belarus and Russia are ready for cooperation with the West, but with respect from the West.

"We are doing well when it comes to import substitution, we will fly our planes, military and civilian, and we will drive in our own cars. There is no fear," the President of Belarus described the current situation regarding Western sanctions.

As he stated, "the future of the West is with us". "Together with Russia, where there is everything we need. And they have what we can buy, technologies and so on. What else do they need? They just need to make responsible decisions and treat us with respect," Lukashenko explained.

"Without that, we will not talk to them at all. No one will tolerate humiliation," Lukashenko pointed out.

"We have decided and we are going this way. Whoever wants to live with us in peace and respect us – we are open, and so are you. But no one will tolerate humiliation, it has never happened to the Russian people," he concluded.

The President of Belarus said that he does not doubt the correctness of the position of Moscow and Minsk and their victory in opposing Western sanctions. "Our goal is just. We will win! We have no other choice," Lukashenko emphasized.

The Belarusian leader thanked Putin for the invitation and the meeting, expressing his belief that all solutions will be found. Earlier, the "Pul Pervogo" Telegram channel announced that the presidents of Belarus and Russia, Alexander Lukashenko and Vladimir Putin, started talking in Sochi.

"The official part of the meeting has just begun," the announcement stated, along with footage from the meeting between the two leaders.

It was previously announced on Telegram that Lukashenko is visiting Russia and that his meeting with Putin is planned.

Commenting on the mobilization and departure of Russian citizens from Russia, Lukashenko briefly commented:

#Lukashenko reassures #Putin: #Russians who left the #mobilization will definitely return “Well, let them run. I don't know how you feel about it, I didn't really care. And these will come,” #UkraineNews 🇺🇦 pic.twitter.com/gnUnSiWUI6