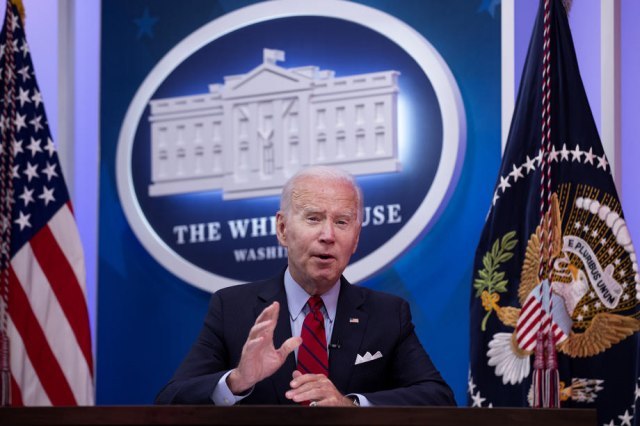 Officials of the Biden administration have known for months that Putin is gathering tens of thousands of troops and sending tanks along the Ukrainian border, the Washington Post writes.

The newspaper listed the chronology of events that took place behind closed doors before the Russian invasion of Ukraine. As the intelligence piled up, Jake Sullivan, Biden's national security adviser, became convinced that Russia was going to war in Ukraine and called an emergency meeting in the Oval Office.

Joe Biden was then told that intelligence on Putin's operational plans showed that everything was ready for a massive attack on Ukraine, and the Washington Post reported that the US intelligence community had its sources in the Russian political leadership in the form of spy apparatus and military.

According to the newspaper, Biden was then told that Putin's current plans envisage the occupation of most of the Ukrainian territory.

The report, with previously unpublished details, sheds new light on the US's struggle to restore credibility, the attempt to balance intelligence secrecy with the need to reassure allies of its veracity, and the challenge of determining how the world's most powerful military alliance will help a less-than-perfect democracy on the Russian border, without NATO firing a single bullet, the Washington Post estimates.

The newspaper states that the text was written after discussions with more than thirty high officials of the USA, Ukraine, Europe and NATO. At the first meeting in the Oval Room, which was attended by the heads of the CIA, the FBI, the first man of the Pentagon, as well as numerous other top officials of the intelligence and defense community, Biden was presented in detail with all the plans of the Russian president in Ukraine.

America is like that, the Washington Post estimates, they got "extraordinary details" about the Kremlin's secret plans, while Russia still denied everything. After being confronted with the new intelligence and analysis at a briefing in October 2021, Biden reportedly had two reactions. First, he should have tried to dissuade Putin, and he believed that someone should be sent to Moscow to sit with the Russians at the highest level and tell them: “If you do this, these will be the consequences. "

Second, it was necessary to inform the allies about the U.S. intelligence and engage them in a unified and decisive position that Russia should be threatened with harsh sanctions, NATO's defenses should be strengthened and expanded, and Ukraine should be helped. So America sent its top officials to Moscow and to the NATO headquarters in Brussels.

The Washington Post then states that four important rules have been established:

1. There must not be an armed conflict between the US military and NATO with Russia.

2. The war must remain within the geographical borders of Ukraine.

3. The unity of NATO should be strengthened and maintained.

4. Ukraine should be strengthened and given the means to fight.

The Biden administration also had another concern - Volodymyr Zelensky, the Ukrainian president, because it was afraid that he was not up to Putin, and all the math was on Russia's side. That's why Biden sent Secretary of State Antony Blinken to speak with the Ukrainian president, in Glasgow, on the sidelines of an international summit on climate change. Zelensky was then told what information America had and that an attack was being prepared.

Blinken admitted, later, that the meeting took place. "It was just the two of us, two meters from each other," he said in an interview.

Nevertheless, Zelensky was skeptical at the time, and at first he considered that US intelligence that Russia would attack them was only speculation. Less than two weeks after the meeting in Glasgow, Ukraine's foreign minister and Zelensky's chief of staff visited the State Department, where a high-ranking US official who welcomed them clearly told them: "Guys, dig the trenches!"

Official guidelines barred U.S. intelligence agencies from sharing tactical information that Ukraine could use to launch offensive attacks against Russian troop positions in Crimea or against Kremlin-backed separatists in the east, so Kyiv never got the extraordinary details that Washington gained insight in.