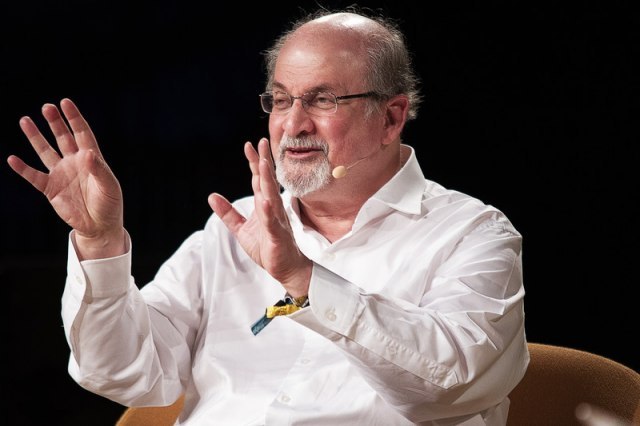 Salman Rushdie, the author whose novel “The Satanic Verses” drew death threats from Iran’s leader in the 1980s, was attacked and apparently stabbed in the neck by a man who rushed the stage in New York's West Side.

Author Salman Rushdie has been attacked as he was about to give a lecture in western New York. An AP reporter witnessed a man storm the stage at the Chautauqua Institution and begin punching or stabbing Rushdie as he was being introduced, the New York Police Department confirmed in a statement.

Rita Landman, a doctor specializing in endocrinology, who was in the audience and offered to help, said Mr. Rushdie suffered multiple stab wounds, including one to the right side of his neck, and that there was a pool of blood under his body. But she said he appeared to be alive. "People were saying, 'He's got a pulse, he's got a pulse,'" reports the New York Post.

A journalist saw how a man stormed onto the stage at the "Chautauqua" institute and started punching and stabbing Rushdie while he was being introduced. The author fell to the floor and was then removed, and the man was restrained.

It is not known what condition Rushdie is in.

A bloodied Rushdie, 75, was flown to a hospital. His condition was not immediately known. His agent, Andrew Wylie, said the writer was undergoing surgery, but he had no other details.

BREAKING: Author Salman Rushdie has been attacked as he was about to give a lecture in western New York. An @AP reporter witnessed a man storm the stage at the Chautauqua Institution and begin punching or stabbing Rushdie as he was being introduced. https://t.co/bVTbfkLjyL

The award-winning novelist Salman Rushdie was previously targeted by Islamists after he released the novel "The Satanic Verses".

Rushdie’s 1988 novel was viewed as blasphemous by many Muslims, who saw a character as an insult to the Prophet Muhammad, among other objections. Across the Muslim world, often-violent protests erupted against Rushdie, who was born in India to a Muslim family.

A reward of over 3 million dollars was offered for anyone who kills Rushdie.

The book was banned in Iran, where the late leader Grand Ayatollah Ruhollah Khomeini issued a 1989 fatwa, or edict, calling for Rushdie’s death. Khomeini died that same year.

In 2012, Rushdie published a memoir, “Joseph Anton,” about the fatwa. The title came from the pseudonym Rushdie had used while in hiding.

Rushdie rose to prominence with his Booker Prize-winning 1981 novel “Midnight’s Children,” but his name became known around the world after “The Satanic Verses.”

Widely regarded as one of Britain’s finest living writers, Rushdie was knighted by Queen Elizabeth II in 2008 and earlier this year was made a member of the Order of the Companions of Honor, a royal accolade for people who have made a major contribution to the arts, science or public life.

NOW - Salman Rushdie is stabbed on stage in New York.pic.twitter.com/qFmYE6BC5E

The media published a picture of the alleged attacker

A photo of the alleged attacker of the Indian writer began to spread on social networks.

The picture shows an unnamed man being led away by the police in handcuffs.

The name of the person in the picture has still not been released, nor has it been determined whether he is Salman Rushdie's attacker.