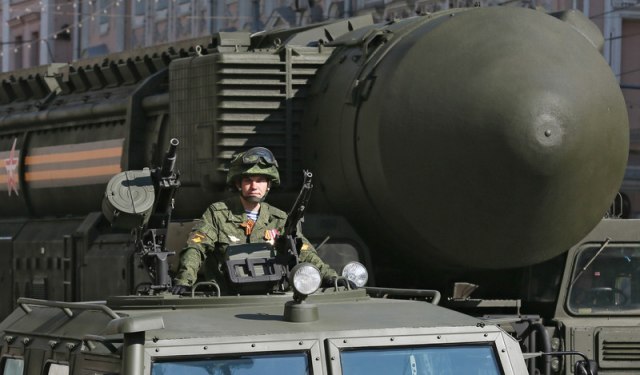 Head of US Strategic Command (STRACTOM) Admiral Chas Richard claims that it needs more Americans working on how to prevent nuclear war.

Officials at U.S. Strategic Command have been responding to how threats from Moscow and Beijing have changed this year, said STRATCOM chief Navy Adm. Chas Richard at the Space and Missile Defense Symposium in Huntsville, Alabama.

“We have to account for three-party threats,” Richard said. “That is unprecedented in this nation's history. We have never faced two peer nuclear-capable opponents at the same time, who have to be deterred differently.”

“Even our operational deterrence expertise is just not what it was at the end of the Cold War. So we have to reinvigorate this intellectual effort. And we can start by rewriting deterrence theory, I'll tell you we're furiously doing that out at STRATCOM,” Richard said.

That’s because early in the invasion, Russian President Vladimir Putin suggested Moscow could respond to any Western defense of Ukraine with nuclear weapons. U.S. officials worry, though don’t expect, that could mean Russia using smaller warheads in limited numbers on specific targets, rather than launching the global thermonuclear war they had feared for decades.

“Moscow is using both implicit and explicit nuclear coercion,” Richard said.“They're trying to exploit a perceived deterrence gap, a threshold below which they mistakenly believe they may be able to employ nuclear weapons,” such as using their tactical, shorter range nukes.

He referred to the military crisis in Ukraine, that is, to the tensions between China and Taiwan.

“Russia and China have the ability to unilaterally, whenever they decide, they can escalate to any level of violence in any domain. They can do it worldwide and they can do it with any instrument of national power. We're just not used to dealing with competitions and confrontations like that,” Richard said.

Despite fears about the possible use of nuclear weapons in Ukraine and Taiwan, it should be recalled that the United States of America is the only country that used an atomic bomb in August 1945, when Hiroshima and Nagasaki were attacked.