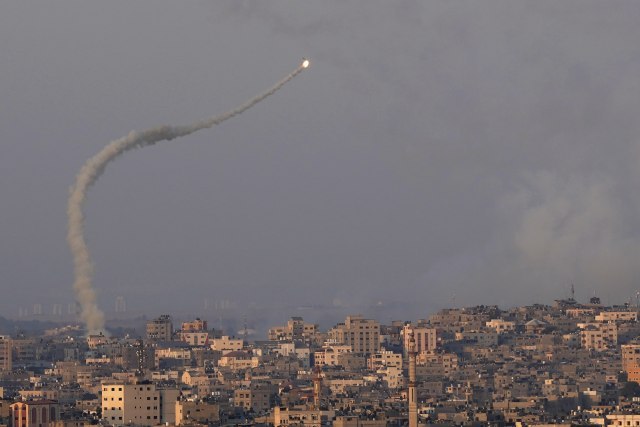 Only eight minutes after 23:30 local time, when a truce was agreed between Israel and the Palestinian Islamic Jihad with the mediation of Egypt, the rockets flew towards Israel, according to Israeli media.

The "Jerusalem Post" states that rockets were fired in the direction of Israeli settlements near the border with Gaza, violating the ceasefire just eight minutes after it came into effect.

Air raid sirens continue to sound in Israeli cities near the border with the Gaza Strip, and according to initial reports, a missile has shot down Israel's anti-aircraft system, Iron Dome, over the city of Sderot, The Times of Israel reports.

So far, there are no reports of damage or injuries in the attack. There was rocket fire a few minutes before 11:30 p.m., a powerful barrage of fire was fired from the Gaza Strip in the direction of Israel and Israeli attacks on Gaza continued, but at the exact time the violence stopped. The ceasefire should end the worst conflict in Gaza since last year's 11-day war between Hamas, which rules the Palestinian territory, and Israel.

"Tonight, at the proposal of Egypt, an agreement was reached on a ceasefire, which also states the obligation of Cairo to work on the release of two prisoners - Bassem Sadi and Khalil Awawdeh," said the high representative of the Islamic Jihad, Mohammed al-Hindi, as reported by the "Times of Israel".

Sadi, the leader of Islamic Jihad in the West Bank, was recently arrested in the city of Jenin and is in Israeli custody.

This is a taste of what our teams experienced in Sderot earlier today.
The Irons Dome shot down hundreds of rockets launched at Israel today.
A few minor injuries were reported across the country as people slipped and fell while running for shelter pic.twitter.com/tF37l68MeZ

About five people, including children, were killed in the Al-Fallujah settlement in the city of Jabalia in the north of Gaza, according to a statement by the Israeli army, which claims that it was the result of a misfired rocket by the Palestinian Islamic Jihad, reports the "Jerusalem Post" citing Israeli media.

However, the Palestinian media blamed Israeli actions for the civilian deaths. "The Times of Israel", also citing Palestinian media, states that several people were killed in the north of Gaza, in Jabalia. Palestinian reports point out that five people, including children, were killed, and claim that Israeli airstrikes are responsible for those casualties.

On the other hand, the Israeli "Channel 12" states that the number of victims is from three to five and that the Israeli defense announced that it is "very likely" that the death was caused by a misfired rocket.

The "Jerusalem Post" recalls that four children were killed in Jabalia on Saturday, when a rocket was mistakenly fired.

Islamic Jihad fired more than 50 rockets at Israel, including the Tel Aviv area, this evening, ahead of an expected ceasefire that was due to take effect at 20:00 local time (19:00 CET).

The air defense was activated and two rockets were intercepted over Tel Aviv, and one over Ben Gurion International Airport, and no one was injured, Israeli media reported.

In the Gaza Strip, it was announced that there were victims in an Israeli aerial attack on a vehicle, as well as in attacks in the north of the Palestinian territory.

The Israeli military expected increased fire from Gaza until the ceasefire began and for Islamic Jihad to try to inflict maximum damage while it still could. Israeli attacks on the extremist organization's targets continued throughout the day, as well as barrage rocket fire from the Gaza Strip, directed at the city of Beer Sheva for the first time in this latest conflict.

Foreign media reported that the Egyptian-brokered ceasefire had the approval of Hamas, which rules Gaza and has not intervened in the conflict. Some Arabic-language media reported that Israel refused to release Islamic Jihad operatives arrested in military raids in another Palestinian territory, the West Bank.

According to the agreement, two border crossings into the Gaza Strip will allegedly be opened and fuel will be delivered to the power plant in the Gaza Strip, which was closed yesterday due to a shortage of diesel. According to the Ministry of Health of the Palestinian movement Hamas, in power in the Gaza Strip, in the Israeli offensive on that enclave, at least 41 Palestinians were killed, including 15 children and four women, and 311 were wounded, France Press reported.

About 580 rockets were fired at Israel, AP reported. Israeli media later reported Al Jazeera that the announcement of the start of the ceasefire was delayed due to Islamic Jihad's demand that Egypt provide guarantees that prisoners from that organization would be released, as well as that Israel would stop attacks on Gaza.

Just a few hours ago, Israeli Prime Minister Yair Lapid said that the goals of the military operation "Dawn" in the Gaza Strip had been achieved.

"The objectives have been achieved. There is no point in continuing the operation," Lapid said at a meeting with the presidents of southern Israeli municipalities, reports TASS, referring to Channel 13 of Israeli television.