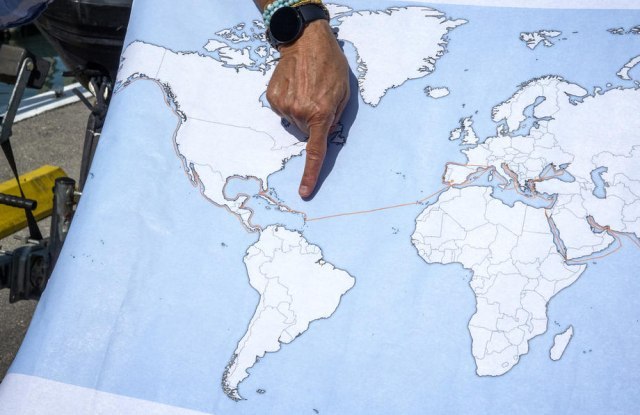 "The process of dividing the world into opposing blocs is accelerating and it is now splitting into several large regions", Russian political scientist, Dmitry Drobnitsky, claims.

According to him, the strongest players in those regions will establish the rules in those regions, and the course of events will lead to the confrontation between the two halves of Russia and China, on the one hand, the USA and Europe, on the other hand, forcing other countries to decide which side to support.

"If the non-Western world is able to coordinate and unite, no one will be able to stop it from building a sustainable new world order", Drobnitsky added.

"The world is not really divided into two warring camps, as it may seem. The West opposes most of the world, imposing fairly discriminatory rules on all other participants in the trade and political process, and then changing those rules at its own discretion. Moreover, the policy of double standards is being replaced by unilateral actions, and these moves are justified by democracy in some European countries, although it is not and cannot be democracy, while the rest of the world is not given any explanations, except one: "You do not listen to the West - you will be punished." Such words do not only reach Russia, but also China, India, many Latin American countries...", says this expert.

According to Drobnitsky, the West is still very strong technologically, financially, and even militarily, but the resources of that united West are no longer the same as they were 20 years ago.

"The great West that everyone is listening to, and which had Asian countries as allies, most of Southeast Asian countries, as well as the Arab world, including oil producers, and part of Latin America, is no more. All the obligations that the collective West, led by Washington, took on earlier, are gradually being rejected, especially in terms of economic stability, food security, energy development, digital sphere, IT technologies and so on," Drobnitsky said.

The uniqueness of the situation is that several regions found themselves in approximately the same position, such as China and Russia, which the West identified as opponents and competitors.

"Everything that China is doing in its region, or what Russia is doing, is generally similar and in that sense they are tactical allies. It cannot be said that it is a direct military and political bloc, a counterweight to NATO or something else, but there is a huge understanding due to the common destiny in conditions when the West can no longer maintain its world order. The food and energy crisis, as well as dollar inflation, show that this is indeed the case and that they cannot guarantee stability in the world. That means that there will be no global stability in the world, but there will be regional ones", the expert points out.

"It is not clear what will happen in Europe. The EU obviously does not know what will happen next and it is unclear what will happen to India - where it will go and whether it will be able to build its region around itself. Despite the obvious advantages, Delhi has serious shortcomings in its ability to build such a region. So, the world is falling apart into large regions, into payment and currency sectors, or clusters, as it is now openly called, and the next world order will by no means be global," Drobnitsky believes.

Many Eastern and European countries will have to decide whether to stick to the side of the sinking EU ship, even at an unexpected speed, or to build their destiny with others, and not with Western players, says the expert.

"Everything that is happening now, and we see cars driving around Europe, cafes are open, people are talking on the 'iPhone' - it's all an illusion. There is nothing to support it. So, very serious changes await us, the picture of the world will change and all Europeans should think carefully. However, European elites generally do not think about it and do not care at all. The main thing for them is to do what their mentors instructed them to do", Drobnitsky pointed out.