These are evacuated Ukrainian soldiers from Azovstal PHOTO

The surrender of Ukrainian soldiers captured in the Azovstal ironworks is still ongoing. According to media reports, they're leaving the besieged factory by bus 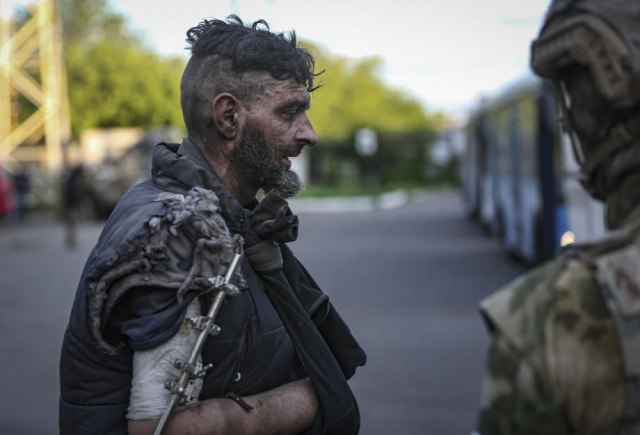 As of May 16, 959 Ukrainian soldiers have already surrendered from "Azovstal", of which 80 were wounded, said the spokesman of the Ministry of Defense, Igor Konashenkov. Fifty-one people were admitted to the hospital. The Russian army is now planning to interrogate them, and the possibility of being convicted of "crimes against civilians" is mentioned.

On Tuesday, buses full of Ukrainian soldiers left the Azovstal ironworks in Mariupol and arrived at the former Olenivka penal colony in Donetsk, which is under Russian control, Reuters writes.

According to the media, they managed to keep the Russian forces for weeks, but in the end they could not stand it anymore because they were left without food, water and ammunition for a long time. Mariupol is now under Russian control.

On the other hand, Ukraine said it was doing "everything possible and impossible" to save the remaining fighters trapped in the steel plant.

"The rescue operation of the Azovstal steel plant will be over only when all the defenders of Mariupol are evacuated to the territories under Ukrainian control," says the Deputy Minister of Defense of Ukraine, Hanna Maliar.

"There are still a lot of people in Azovstal and we are continuing negotiations to get them out of there," Maliar told the BBC.

She emphasized that this was a sensitive operation and warned that any order could be dangerous for people's lives.

Maliar claims that the calls of politicians in Moscow to take individuals who were taken out of the steel plant to a war crimes trial were "most likely due to domestic propaganda in Russia".

"Negotiations are still ongoing and we hope for a positive result," Maliar said.

Maliar stated that Kyiv knows how many more soldiers are in the steel plant, but she emphasized that this is "sensitive information".