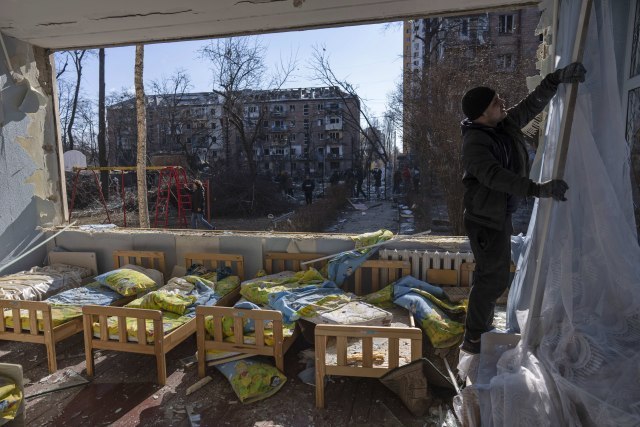 In Mariupol, the evacuation of soldiers from the "Azovstal" ironworks has begun, Kyiv announced.

A series of explosions shook Lviv, a witness from that city told Reuters.

At a summit of member states of the Collective Security Treaty Organization (CSTO) in the Kremlin, Russian President Vladimir Putin said that there was no direct threat from NATO enlargement to Finland and Sweden, but that expanding military infrastructure to those territories would certainly provoke a Russian response.

The EU has not yet reached an agreement on the sixth package of sanctions against Russia.

Evacuation of the wounded from Azovstal

The remains of a Russian plane near Kharkov.

Ukrainian President Volodymyr Zelensky stated that Ukraine is trying to save soldiers from the Azovstal steel plant.

The General Staff of the Armed Forces of Ukraine announced that 53 severely wounded soldiers were transferred to a medical facility in Novoazovsk, and that 211 fighters were evacuated to Jelenovka via a humanitarian corridor, Ukrinform reported.

"I want to emphasize that Ukraine needs living Ukrainian heroes. This is our principle. I think that every person will understand these words," Zelensky said in a video address.

He added that he hoped that thanks to the actions of the Ukrainian army - the Armed Forces, intelligence services, as well as the negotiating team, the International Committee of the Red Cross and the UN, the lives of Ukrainian guys would be saved, Ukrainian Justice reported.

Earlier, the Ministry of Defense of Russia announced that an agreement had been reached on the evacuation of wounded Ukrainian soldiers from the blocked Azovstal factory in Mariupol. The General Staff of the Ukrainian army announced that the soldiers defended by Azovstal have fulfilled their task, Reuters reported.

"The Supreme Command ordered the commanders of the units stationed in Azovstal to save the lives of soldiers. We continue with putting efforts in rescuing the defenders who remained in Azovstal," it is stated in the announcement published on Facebook.

Scholz: Peace is not possible by legalizing the conquered territories

German Chancellor Olaf Scholz rejected the possibility that Russia could achieve peace with Ukraine by legalizing the conquered territories in that country.

"It is clear that Russia has only one way out of this situation, and that is the agreement with Ukraine," Scholz told RTL. And the agreement, as he explained, is not possible by "dictated peace", whereby Ukraine is in advance asked to give up its territory, Bild reports.

Scholz added that the case of Crimea will not be repeated, where the war ended in the sense that there were no shootings, but the new border line was withdrawn and where they are just waiting for everything to return to normal.

A series of explosions in Lviv

A series of explosions was heard in Lviv, in the west of Ukraine, Reuters reports, referring to eyewitnesses.

There is no information about the victims, and the explosions were heard just over an hour last night.

The agency said eight to 10 explosions were heard in a row.

After the evacuation, Mariupol was controlled by the Russians

The Ukrainian army announced yesterday that it is working on the evacuation of the remaining soldiers from their last stronghold in Mariupol, leaving the control of the city to Russia. Meanwhile, the Ukrainian side has tried to avoid using the term "surrender". After the last Ukrainian soldier leaves "Azovstal", the battle for Mariupol will be practically over and Russia will gain complete control over the strategically vital city.