Moscow Victory Parade; Putin: "NATO is moving towards us, our operation is righteous"

Russia traditionally marks the Day of Victory over Fascism in the Second World War with a large military parade in Moscow, as well as 28 other Russian cities. 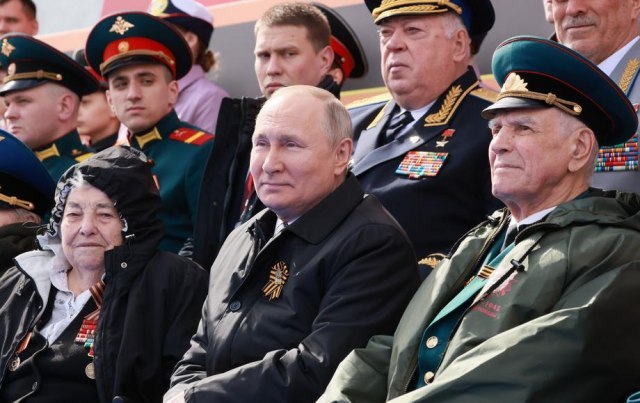 Addressing the soldiers, Putin pointed out that they are fighting "for our people in Donbas, for the security of our homeland."

"Our duty is to preserve the memory of those for whom we are winners and not to repeat the global war. In previous years, we tried to maintain peace agreements, but they did not want to listen to us. They had a completely different plan, now we see it. NATO is working with the Ukrainian Nazis, Ukraine is getting the most modern weapons. The decision on a special military operation was the only right one," he said.

Putin talked about Russophobia. He claimed that some U.S. veterans were prevented from coming on Victory Day celebration, even though, as he said, they wanted to come.

"We will never give up our love for our homeland. American veterans have been banned from coming to Moscow, but we want you to know we are proud of your feat, as well as all those who destroyed Nazism. Today we are fighting for our country in Donbas. Donbass, you are fighting for our security, so that there is no blood from the neo-Nazis. Today we bow to all those who died, we bow before the martyrs of Odessa, we celebrate the inhabitants of Donbass and all those who died by the hand of Nazis," Putin said.

The speech was interrupted due to a minute of silence. Putin wished a speedy recovery to all wounded soldiers and thanked the medical staff.

"The death of each of our soldiers is a great tragedy for us. We will provide special support to the children of killed and wounded soldiers, I signed a new decree today. I wish speedy recovery to all the wounded and thank all the doctors who are fighting for every life of fighters who arrived from Donbass".

"Those who want to split us from the inside have not succeeded. That is our great unwavering strength. We are fighting for the well-being and security of the Homeland. We are protecting Russia's independence. Those who defeated Nazism have shown us an example of courage for all ages. Glory to our army, to our Russia! For victory!", Putin concluded his speech.

11.000 soldiers and 33 echelons will parade through Moscow's Red Square, while 77 fighter planes and helicopters will fly over them.

The parades will also be held in 28 Russian cities, and about 65.000 people, 2.400 weapons units and more than 460 aircraft will take part in them. However, Kremlin spokesman Dmitry Peskov said that the air part of the parade was canceled due to weather conditions, according to RIA Novosti.

This year's military parade on Red Square will be held in specific circumstances due to the Russian military operation in Ukraine, while the West is looking forward to Putin's address.

During the USSR, the Victory Parade was held only on jubilee anniversaries, and since 1995 it has been held every year.

The then USSR lost 27 million people during the war, of which 14 million were civilians.