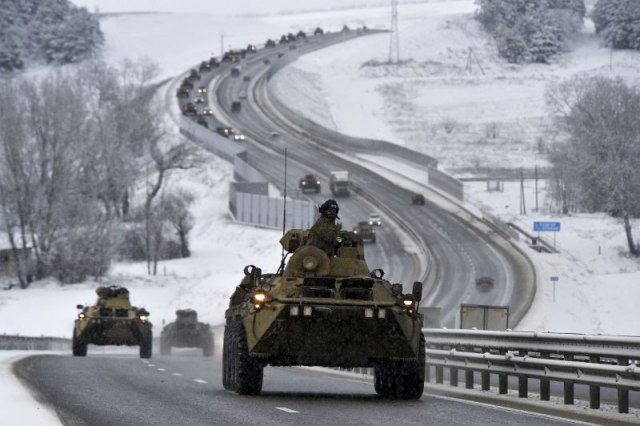 Maja Vuckovic is one of 80 of our people who live in Kiev, and as she says in an interview with B92.net, she will not behave like a stubborn Serbian woman, but if "things get tough", she will accept to leave that country.

"It is not easy to predict what will happen. I have somehow given in to my husband's assessments and promised that I will not be a stubborn Serb if it gets worse, but I will agree to leave Ukraine as soon as he estimates that the time has come. Will that time come? I hope not, is it safe - no, we receive notifications and news from various portals every hour".

Maja Vuckovic and her husband have been living in Kiev for three years, and when asked why she chose that city, she answers:

"Simply put, out of love for one man, my current husband. We first found ourselves in Lviv, a beautiful city in western Ukraine, and then, a few months later, we came to Kiev, where we are now. My husband is German, and he got a job in Ukraine as part of a large international organization. He had lived in Belgrade for more than five years, fell in love with Serbia and Serbs, and then married a Serbian woman. Fortunately, I have already developed my business online, the psychotherapy and education I hold, so I was at peace when he got the job here, I could go with him".

As she says, Kiev will always be for her "a place where she experienced two difficult crisis situations in her mature years: one when the COVID-19 pandemic began and the current one, when there is a threat of war."

The question arises, what is the current situation and whether she feels safe.

Tensions are rising, there are fears not only of an invasion of the armed forces but also of hacker attacks, of the possibility of people being left without basic means of subsistence, heating, electricity, water. At the current -6 degrees, that would not be convenient.

There are rumors about possible plans for invasion, which cities will be the first to be hit, various scenarios of possible attacks. Although this country has been at war for seven years, somehow it was all 'out there somewhere in the east' and there was not too much tension here in Kiev. However, these days, the concern is growing. With all the people I've heard or exchanged emails these days, preparations are mentioned, we are all making the "what if" plans.

She also compared the current situation with the bombing of Serbia in 1999.

"As someone who survived the bombing, I felt all the tension of waiting to be attacked by NATO forces, after 23 years, I felt the same tension again. Every day, first thing is to get updated information about the current situation and then starting regular business activities," she said in an interview for B92.net. When asked how people in Ukraine see the current situation, Maja Vuckovic says:

"When we comment on the current situation, we often hear the following: 'We are fed up with intimidation', maybe we Serbs are special on that issue again, in our country, every now and then, we are 'rattling with weapons'. Although, this seems more serious in Ukraine now."

"The husband of an acquaintance signed up to go to war"

She states that there are people who accumulate stockpile of goods for "just in case" situations.

"There are people in stores who carry more of those specific 'God forbid' foods, much like they did at the beginning of the pandemic. I hear from an acquaintance that her husband has decided to volunteer to go to war if that happens. Others are preparing evacuation plans if necessary".

She states that she is an "ordinary woman", expressing her impressions. "What else would I like to tell you, emphasizing that I am just an 'ordinary woman' who expresses her observations after three years spent in this country, among these people."

Inevitably, the question arises as to how she feels personally: I am disturbed by the information that America, England, Australia and several other countries have withdrawn their staff from embassies and then I hear in the news that some officials claim that the withdrawal of people is premature or that there is no reason at all. Also, several airlines have canceled night flights to Kiev, but for now, commercial flights still exist.

There are a lot of confusing information from various sources. Somehow, I am under the impression that we, primarily because of my husband, are in a privileged situation when it comes to information, but I feel very sorry for people who are deprived of many sources available.

It all reminded me of 1999 and to our situation. This is a huge country, a lot of people live here. I sincerely hope that there will be no escalation. Because if it comes, it will be really scary. I don't want to think about it. One does not fall in love so easily with this country, these people do not get under the skin just like that. But when you meet them, then everything changes, you sympathize with their suffering and pain".

"My heart aches for caring mothers"

She points out that she hopes that the "big ones" will be wise and rational enough not to support but to de-escalate this crazy situation.

"I am afraid for all these children, and the only thing that keeps me relatively calm at the moment is the fact that my child is safe in Serbia. My heart aches when I think of all the mothers here who fearfully await a new day every night thinking about the safety of their children. Just so that nothing happens, just so that reason and humanity prevail".

They hope that Serbia will help

She says she expects Serbia's help in case of a conflict.

"If that is not the case, we also have our own plans for withdrawal. We are counting on our embassies to take care of their citizens and help if there is a conflict."

"During that time, we, like everyone here, are listening and hoping for the best outcome," Dr Maja Vuckovic, one of 300 Serbian citizens who are at the epicenter of tensions, concluded in an interview with B92.net.