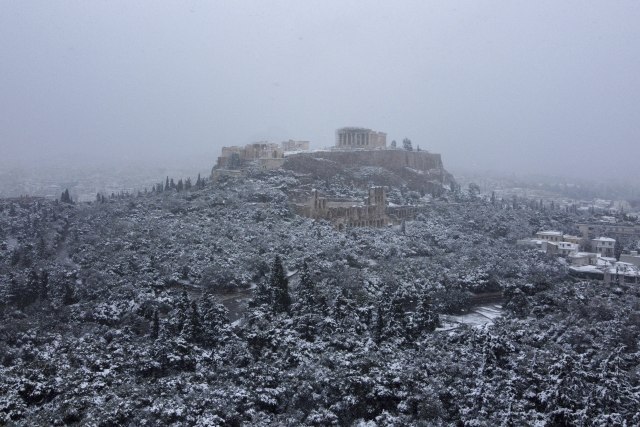 The most dramatic situation is on the Attiki Odos highway, the bypass around Athens that connects the capital with the airport, where hundreds of vehicles are currently still trapped, reports the Greek portal Kathimerini, as Blic finds out.

Rescue teams fought all night to free hundreds of drivers at a time when a storm named "Elpida" hit Greece and covered Athens with a thick layer of snow, Reuters reports.

Land rescue units with heavy machinery and ambulances are taking part in the rescue operation.

Greek Minister for Climate Crisis and Civil Protection Christos Stylianides blamed the company in charge of the road for such a situation on the bypass, stating that its leaders assured at several meetings with government representatives that they would have enough equipment to keep the road open to traffic.

"I think we need to establish responsibility. I will propose that to the prime minister," the minister said.

Global warming has struck the Mediterranean with blizzards across the Athens & the Greek islands https://t.co/DshFF3cqj5

Greek media showed footage of soldiers sharing food, water and blankets with some of the drivers as the temperature dropped overnight.

About 5.000 drivers spent hours trapped in cars at low temperatures on the Attiki Odos highway.

Some of the drivers said that they were trapped in cars for more than 20 hours on Monday, and in the posts on social networks, dozens of people could be seen walking through the snow, including parents with small children. They left cars and trucks by the roadside, walking in search of shelter.

The company that maintains the highway apologized and announced that it would conduct a detailed investigation into why the emergency systems broke down, despite repeated warnings of unfavorable weather conditions in the week before the snowstorm. Authorities are clearing the highway of snow and ice, and are trying to move the abandoned cars and trucks with cranes.

Police have warned drivers that they should not take to the streets of Athens without snow chains, as conditions remain dangerous.

Fifteen passengers were injured when a rail vehicle tried to pull a train with about 200 passengers, which stopped in heavy snow in central Greece.

Two of the injured are in serious condition, a police official said. Railway and bus traffic in Athens has been suspended, and vaccination facilities against COVID-19 in the wider Athens region and on the nearby island of Evia have been closed, health officials said.

Government services, schools, shops and banks that are not needed in the two areas and on many Greek islands, including Crete, will also be closed today as cold weather is expected to last until tomorrow.

Greek airline Aegean Airlines canceled almost all but five flights yesterday, and announced that the schedule would probably be disrupted today and tomorrow.

A cold front brought unusually low temperatures and rare snow to parts of Greece, including the island of Santorini. pic.twitter.com/L0rULr8IWz

In the Attiki region, some areas are currently without electricity due to damage caused by continuous snowfall.

Greek government declared today a national holiday in the public and private sectors, after a large snow cover blocked the entire country.