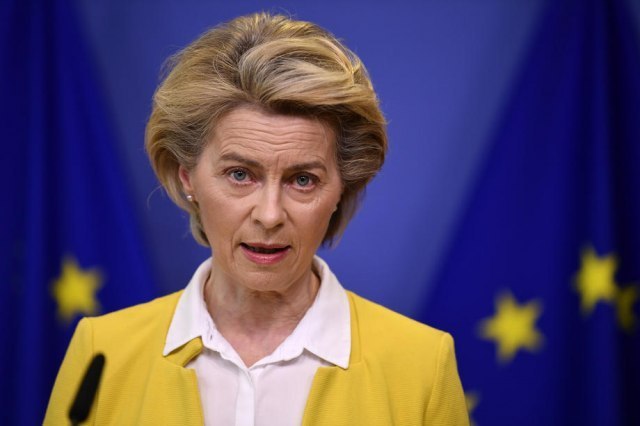 She emphasized that the governments of the member states will decide on that measure.

"My personal position is that I think it is understandable and appropriate to lead this discussion now," she told a media conference, underlining that a third of the EU population of 450 million was still unvaccinated.

"How we can encourage and potentially think about mandatory vaccination within the European Union? This needs discussion. This needs a common approach. But it is a discussion that I think has to be led," she said.

Von der Leyen says that full vaccination and boosters give citizens the strongest protection currently available against coronavirus in a situation of double danger, the fourth wave of the pandemic and the appearance of a new strain of coronavirus.

"The WHO says that the new strain omicron is high risk. We don't know enough about that strain yet, but we know so much that we can be worried. We expect to get enough information about the new strain in two to three weeks, and by then we will have a race with the time we need to use for vaccinations and boosters", says Ursula von der Leyen.

EC President announced that the EU will receive an additional 360 million doses of vaccines from the companies Pfizer and Moderna by the end of March, which, according to her, is enough for a booster dose of all vaccinated Europeans. At the same time, in agreement with those two companies, they are working on the accelerated delivery of vaccines for children, which should be available in the EU from December 13, 2021.

In the event that the existing vaccines do not provide sufficient protection when it comes to the new strain, Ursula von der Leyen states that it takes scientists about 100 days to adapt the vaccines to the new mutation.