Romania is facing one of the worst coronavirus waves in Europe. 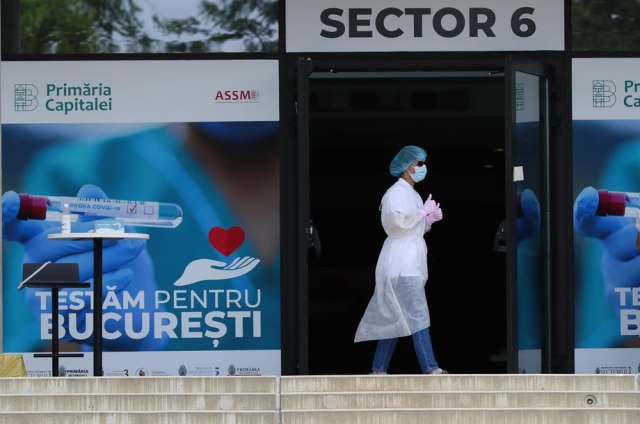 This is due to widespread skepticism about vaccines, but also the inability of the president and government to convince the people of the need for vaccination.

The video from the University Clinic in the Romanian capital, Bucharest, is hard to bear.

There are no free beds in the Intensive Care Unit, the hallways are crowded with waiting patients, the medical staff is driving the dead people in black plastic bags. Ambulances are constantly bringing in new patients.

Almost all are old people, mostly those who have not been vaccinated against coronavirus. Many can barely breathe, and some say they would not be vaccinated despite everything. One doctor commented: "This influx of patients has to do with people's negligence and lack of information. Politicians need to be much more persistent. If they are concerned about the welfare of voters, they should be constantly told to go and get vaccinated. Videos from the University Clinic in Bucharest left us speechless and lasts 16 minutes. They are entitled: "This is what a health catastrophe looks like."

Record number of sick and dead

What was shown in the video at one clinic is currently happening in hospitals all over Romania. That country is facing one of the worst coronavirus waves in Europe.

New records are set almost every day. On Tuesday (October 19), it was announced that almost 19.000 newly infected had been recorded in the previous 24 hours and that 574 people had died.

"We are not only in a pandemic, we are in a catastrophe," the president of the Romanian Medical College (CMR), Daniel Coriu, said on Tuesday. Last week, they wrote an open letter entitled "Scream of Despair" in which they described the catastrophe of the health system.

It is also a catastrophe that is happening in the background of a serious political crisis: after several months of disputes, the social-liberal government of Prime Minister Florin Cîțu was overthrown in early October by a vote of no confidence. It could be weeks and weeks before a new coalition government is formed.

"Our sincere condolences to Romania!" - that was the title of the text that was published on the "Hotnews" portal, which writes about the catastrophic health and political crisis in the country. Romania is not entirely the only case in Europe. Latvia, Lithuania and Bulgaria currently also record a high incidence and number of deaths per day.

What sets Romania apart from other EU countries is that its health care system is overburdened like no other and that, according to many hospital directors and doctors, it is on the verge of collapse. At the same time, Romania, along with Bulgaria, has the lowest coronavirus vaccination rate in the EU. Only about 30% of the population is fully vaccinated - significantly less than half of the average number vaccinated in the EU. Skepticism about vaccines is a widespread phenomenon that is supported by nationalist politicians, as well as the influential Romanian Orthodox Church.

Romanian President Klaus Iohannis caused a catastrophe on Tuesday, when, addressing the population with serious words, he called the situation a "national drama of terrible proportions" and announced an urgent meeting of all decision makers for Wednesday, October 20. The head of state blamed the widespread skepticism on the issue of vaccination, but also the "lack of concrete moves by the authorities". He also appealed to the population to get vaccinated.

Some commentators said that his speech was cynical - because Iohannis and the government led by the now interim Prime Minister Florin Cîțu, which the president supports, acted chaotically for months when it came to managing the pandemic, ignoring and even belittling the danger of the coronavirus. In June, Iohannis assessed that the vaccination campaign was "successful" and said that the pandemic had come to an end. Florin Cîțu also said in June that the pandemic had been "eliminated" - although experts at the time had already warned that preparations should be made for the fourth wave of coronavirus.

However, the government remained largely inactive, and measures were even eased. The requirement to wear masks in public institutions and shops was difficult to enforce, and restrictions on attending major events - along with vaccination certificates or testing - were often not respected.

The government did not strongly call for vaccination either. Only in early October, when the devastating fourth wave had already appeared, the government introduced new restrictions - constant wearing of masks, curfew, restrictions on going to mass events.

President and Prime Minister of Romania are, above all, those who have done almost nothing so far to oppose the widespread skepticism regarding vaccination. Opponents of vaccines have been able to demonstrate unhindered in the country, with hundreds of thousands of fake news about vaccines circulating on Romanian social networks.

A soundtrack from a school lesson in the northern city of Botoșani recently made headlines. The students secretly made a recording in which a teacher is heard telling them that the vaccines will turn them into "zombies" and accused the hospitals of organized mass extermination "like in Auschwitz".

Priests and bishops of the Romanian Orthodox Church are also at the forefront of opponents of vaccination and skeptics. Last week, for example, Bishop Teodosije from southeastern Romania spoke out against vaccines - that they are not sure whether they should receive vaccines, but also that vaccination is now being stopped in the EU.

Investigations against anti-vaxxers and false statements, such as the one given by Teodosije, have so far been conducted in only a few cases. Romanian politicians are especially wary of the Orthodox Church, as it is one of the most prestigious institutions among the population. The word of the priest, especially in rural areas, often carries the greatest weight.

Due to the devastating fourth wave, the Romanian government had to ask for help from abroad for the first time last week. Oxygen devices and intensive care beds will now be delivered to Romania from other EU countries. Neighboring Moldova, much poorer than Romania, has sent doctors and medical staff to help sick Romanians.

The government in Budapest has agreed to accept Romanian patients and the first patients have already been transported to the south and southeast of Hungary. This gesture of solidarity is very important, because the Romanian-Hungarian relations have been quite tense lately.

Meanwhile, Romanian Health Minister Attila Cseke warned that the situation is not expected to improve quickly. He said on Tuesday on the public service TVR that the peak of the fourth wave of the coronavirus is still far away and that it is not even in sight when the number of newly infected will start to fall.