It has been 15 years since the murder of Russian journalist Ana Politkovskaya in the center of Moscow. 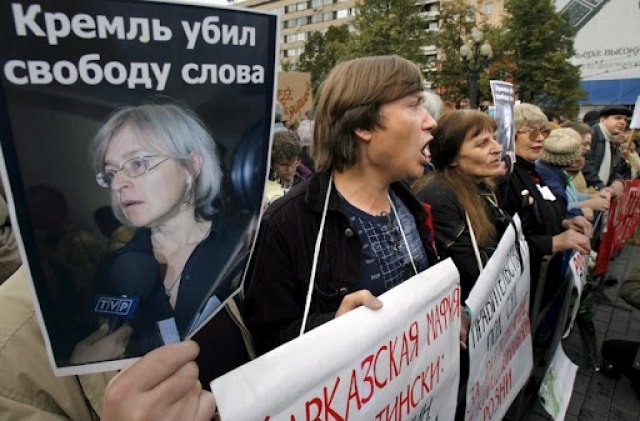 The public still does not know who ordered that crime, which is now practically obsolete.

Exactly 15 years ago, Ana Politkovskaya was killed. A multi-award-winning Russian journalist and human rights activist was shot dead in broad daylight in Moscow. She was 48 years old. The perpetrators have long been convicted, and the murder case is now obsolete.

It's a turning point. The organizers of the crimes have never been held accountable for it, and if they are ever arrested, they no longer have to fear of being punished.

Has an investigation been conducted against them at all? Dmitry Muratov, the editor-in-chief of the renowned newspaper "Novaya Gazeta", for which Politkovskaya worked, also tried to find the answer to that question. The competent investigation committee did not even answer his question, Muratov said in an interview for the private station RTVI.

Only a few years ago, in July 2018, the European Court of Human Rights condemned Russia because, in the opinion of the Court, that country did not do enough regarding the investigation of the murder of a famous journalist. Her family members were awarded compensation. They also filed a lawsuit, including Ana Politkovskaya's mother, Raisa Mazepa, who passed away in the meantime.

Crime in the center of Moscow

The ordered murder of Ana Politkovskaya took place on Saturday, October 7, 2006, shortly after 4 p.m. A few minutes before that, the journalist arrived home by car and was carrying several bags of groceries in her hands. She entered the elevator and before climbing into her apartment, the killers shot at her from close range. One of the four bullets hit her in the head.

In Russia, but also abroad, the murder of Ana Politkovskaya provoked violent reactions. Russian President Vladimir Putin visited German Dresden only a few days after that crime, and several demonstrators greeted him with shouts: "Killer!"

The very fact that Politkovskaya was killed on Putin's birthday was the reason for numerous speculations. Some were convinced that the perpetrators wanted to give a "gift" to the president. The connection between the crime and the birthday, however, has never been proven.

Ana Politkovskaya was born in 1958 in New York, as the daughter of a Soviet diplomatic couple from Ukraine. She studied journalism in Moscow, wrote for various print media, and at the end of the 1990s, she became known throughout the country as a reporter for "Novaya Gazeta". Her life theme was the second war in the separatist Russian republic of Chechnya.

Politkovskaya often traveled to the North Caucasus area and wrote her own reports with which she won numerous awards. These were, among other things, stories of murders, torture and kidnappings - on both sides. In her reports, Politkovskaya also accused the current Chechen leader, Ramsan Kadyrov. Politkovskaya has published several popular science works - such as the book "In Putin's Russia" - in which the journalist publicly condemned the Kremlin chief and his authoritarian rule.

Austrian journalist and former correspondent from Russia Suzana Scholl, who also knew Politkovskaya personally, says that the murdered colleague was "haunted by the desire for justice, in order for all these things to happen to be made public; she was haunted by the feeling that allow the new Russia to fail like that". Politkovskaya also helped Chechen families and mothers of killed or missing Russian soldiers.

Search for the killers

The search for the killer and his helpers was difficult. Although the first suspects arrived relatively quickly, it took several trials and a total of eight years until they were convicted.

It quickly became clear that the tracks lead to Chechnya. The first trial began in 2008 and ended after only a few months - with an acquittal. Due to lack of evidence. Authorities then introduced three suspects: two brothers, Ibrahim and Jabrail Mahmudov, and former police officer Sergei Hadzhikurbanov.

The Supreme Court overturned the verdict in 2009 and the proceedings were reopened. After new investigations, the circle of suspects was expanded - in 2011, Rustam, the third brother from the Mahmudov family, was arrested. In a separate trial in 2012, Dmitry Pavlyuchenkov was sentenced to eleven years in prison.

The former colonel of the Moscow police was the crown witness in the "Politkovskaya case". He admitted that he followed the murdered journalist and that it was he who procured the weapon with which she was killed.

The most important, and so far the last court procedure, began in January 2014 and ended with the pronouncement of five convictions in May of the same year. The murderer of Russian journalist Rustam Mahmudov was sentenced to life in prison. His brothers Jabrail and Ibrahim received sentences of 14 and 12 years, respectively, in a labor camp.

"I think that in her research she reached a point that was no longer pleasant to the Russian leadership, and especially not to the Chechen leadership," says Suzana Scholl. "I think that's why she was killed."

Former colleagues and family members of the murdered journalist believe that the crime has not been clarified yet. Novaya Gazeta demands further investigations into those who ordered the murder. The (now grown-up) children of the liquidated journalist - Ilya Politkovsky and Vera Politkovskaya - have similar demands.

"Novaya Gazeta" tirelessly tries to keep the memory of Ana Politkovskaya alive. This year, a so-called flashmob was organized. On the birthday of Ana Politkovskaya at the end of August, people from all over the world sent the editorial office a short video with the favorite music of the murdered journalist, Astor Piazzolla's "Libertango". A flower bed was planted in the yard in front of the editorial office in 2018. Ana Politkovskaya's mother also planted about a hundred violets there. These flowers are called "Ana's Eyes" in Russia.