The floods in New York and New Jersey killed at least 23 people, while floodwaters halted road, train, and air traffic. 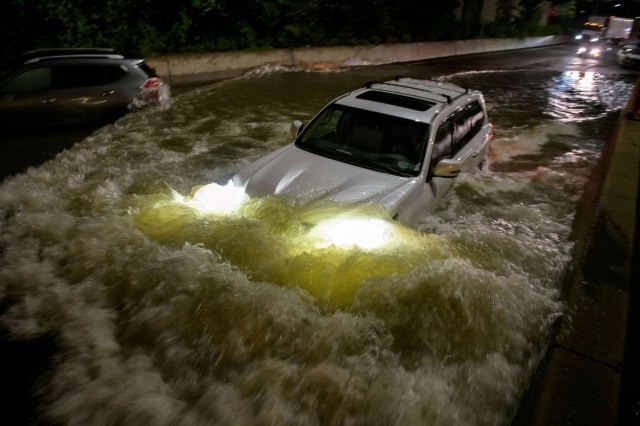 The New York area was hit by the remains of Hurricane "Ida on Thursday morning. Floodwaters halted road, train, and air traffic in New York and New Jersey, leaving behind death and material damage in several U.S. federal states.

Nine people were killed in New York, while 14 more bodies were found in New Jersey. The death toll continues to rise, and authorities say people were killed mostly in basements. Among the victims was a two-year-old boy whose lifeless body was found in the apartment together with a 50-year-old man and a 48-year-old woman, NBC reports.

Some of them remained stuck in flooded basements in New York's Queens district, which were illegally converted into apartments.

A tornado in southern New Jersey razed houses to the ground. More than 200.000 homes in New York, New Jersey and Pennsylvania were left without electricity, and a state of emergency was declared throughout the region.

Hundreds of people were evacuated from trains and the subway, and emergency services had their hands full rescuing people stuck from flooded houses and car roofs.

The flood that hit New York and the surrounding area broke the records set by the tropical storm "Henry" only 11 days ago.

Climatologists announce that frequent strong storms will be a new normality - warmer air retains more water and allows storms to gather strength faster and become bigger. Airports were opened, but hundreds of flights were canceled. Rescue continued on Thursday morning local time, and river levels in New Jersey and Pennsylvania are still rising.

New York Mayor Bill de Blasio described the situation on Wednesday night as a "historic catastrophe", and the National Meteorological Service issued an alarm and for the first time, NYC was put under a flash-flood emergency.

Watch: The New York area was under a state of emergency on Thursday after the remnants of Hurricane Ida led to at least 14 deaths and disrupted subway service. Across the city, New Yorkers documented the scene as flood waters overwhelmed buses and subways. https://t.co/spVsdgF0XX pic.twitter.com/r2vg2aDRVg

US President Joe Biden addressed the public. "I want to thank all those who responded and worked all night until morning to save lives and bring electricity back to homes," Biden said at the beginning of his White House speech.

"Although the catastrophic floods are not as severe as before Hurricane Katrina 16 years ago, Ida was so strong that the Mississippi River changed direction," he said. Biden said that more than six thousand members of the National Guard helped.

U.S. President criticized the insurance companies because they were found unprepared in the middle of the hurricane and did not pay people money for the damage. He eventually sent a message to people in the affected areas. "We are here for you. We make sure that the response to the disaster is fair," he concluded.

A bus driver in Queens, N.Y., managed to get passengers safely through flooding caused by the remnants of Ida.

Floodwaters halted road, train, and air traffic in New York and New Jersey. The rain was so heavy that for the first time, NYC was put under a flash-flood emergency. pic.twitter.com/LTx5yjuqA5

That explosion in Rahway was wild 🤯 pic.twitter.com/FNq05lOD2l