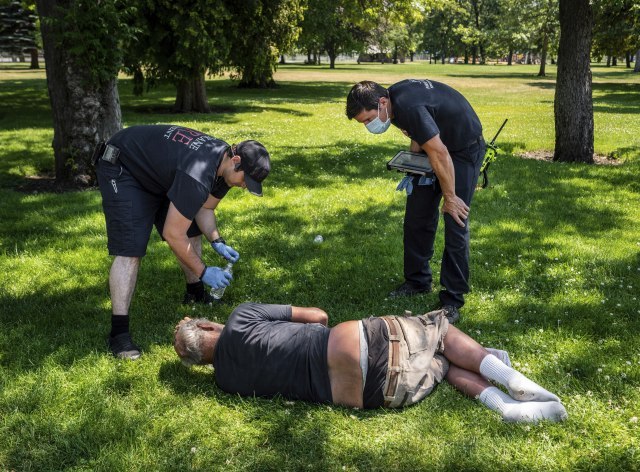 In Seattle and Portland, after several consecutive days of record high temperatures that exceeded 37.7, there was a relaxation on Tuesday, but the temperatures in the cities in eastern Oregon and the cities in Idaho increased a lot, reports AP.

42.2 degrees were measured in Spokane, Washington, which is the highest temperature ever recorded in that city.

About 9.300 households in the city were left without electricity on Monday, and the electricity distribution company announced new restrictions.

US President Joe Biden spoke, during the promotion of the infrastructure plan worth 1.2 thousand billion dollars in the city of Lacrosse in the state of Wisconsin, about the need for the country to prepare for extreme weather conditions.

"Did anyone ever believe that they would hear on the news that it was 37 degrees in Portland? But don't worry, there is no global warming because it is just a fabrication of our imagination," Biden said.

Meteorologists believe that the heat wave was caused by an anticyclone over the northeastern United States and man-made climate change, which is why such phenomena are more probable and intense.

According to media reports, dozens of people have also died in Canada these days due to the great heat that broke temperature records.

More than 130 sudden deaths have been reported to Vancouver police since Friday, most of them elderly or chronically ill. Record temperatures in Canada are recorded for the third day in a row, and on Tuesday, 49.5 degrees were measured in Litton, British Columbia.

Prior to this week, thermometer in Canada never exceeded 45 degrees, reports the BBC.

Many homes in British Columbia do not have air conditioning because temperatures are usually much milder during the summer months. "It has never been so hot in Vancouver and unfortunately dozens of people have died from the heat," said Police Chief Steve Edison.

Climatologist David Phillips says that Canada is the second coldest and snowiest country in the world. "We often witness cooling and blizzards, but we don't talk about heat like this so often," he said, adding that Dubai is now colder than Canada.