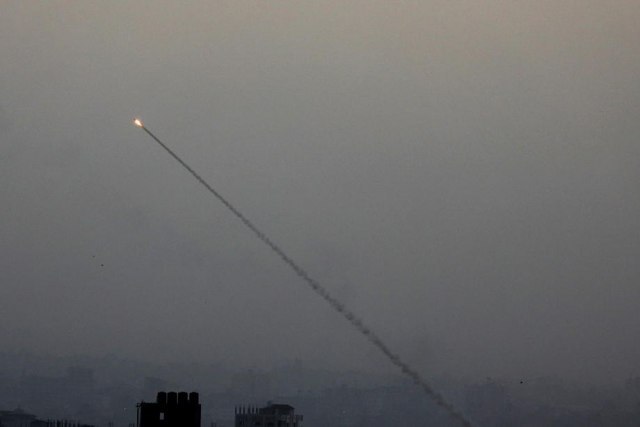 The Israeli side claims that the attacks are a response to flammable balloons, better known as "balloon bombs", launched from Palestinian territory, the BBC reports, adding that the initial trigger for the bombing was a gathering of Jewish ultra-rightists allowed by the new Israeli government.

It is the first major conflict since a truce was struck on May 21, after days of international pressure to end the 11-day bloodshed. The attacks killed more than 250 people, including 68 children, most of them in Gaza.

The latest explosions were heard on Wednesday, in the early hours, reports "Blic", according to the BBC.

Horrific pictures and footage of the bombing are circulating on social networks, with comments "it's happening again", "wake up", "Israel is dropping bombs again".

Several "balloon bombs" were sent from Gaza a few hours earlier, which caused about 20 fires in communities near the border, the Israeli fire service announced.

Gaza is now under attack by the Israeli air force
#GazaUnderAttack#Gaza#SavePalestine#SaveSilwan#SaveSheikhJarrah#غزة#غزة_تحت_القصف pic.twitter.com/8GcLZlrvur

The Israeli Defense Forces (IDF) says their fighter jets hit Hamas-run military units in the city of Khan Yunis in the Gaza Strip.

This is not the sunset in Gaza this Gaza being bombed now AGAIN
#GazaUnderAttack #غزة_تحت_القصف #PalestinianLivesMatter #palestine #gaza #FreePalestine pic.twitter.com/1ps20thjGT

A Hamas spokesman announced on Twitter that the Palestinians would continue their "brave resistance" and defend their rights "until the occupier is expelled from our entire country."

The sound of #Israeli military drones can be heard , state of fear in #Gaza tonight as the Israeli airstrikes have renewed, Israeli warplanes attacked 2 #Hamas military sites in response to sending incendiary balloons that caused fires in southern #Israel. pic.twitter.com/yrTWikmiMX

It is unknown at this time whether there were any casualties or injuries in the attack.

The initial trigger for a new conflict is, according to the BBC, a march of Jewish Utra-Nationalists in East Jerusalem on Tuesday, marking the conquest of the part of the city in the Six Day War in 1967, which was perceived as a potential threat to Hamas, a militant group in Gaza.

Skirmishes have already begun, and Israeli police fired rubber bullets at Palestinians protesting against the march of Jewish ultranationalists in the Arab quarters in Jerusalem, reports the "Guardian".