Palestinian forces fired hundreds of rockets at Israel, which carried out strong air attacks on the Gaza Strip. The dead are counted on both sides. 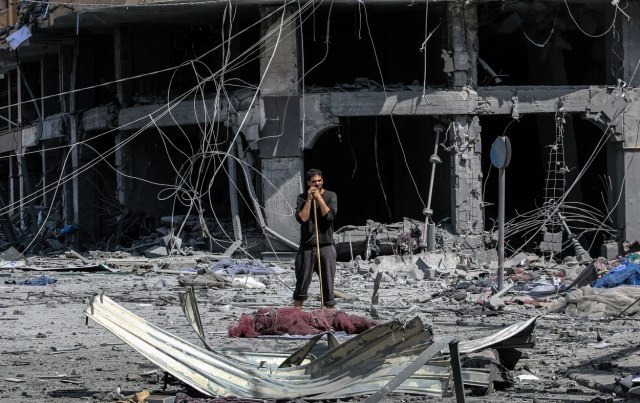 Clashes continue today, with at least 35 killed in Gaza and five in Israel.

Palestinian forces have confirmed that they fired hundreds of missiles at Tel Aviv after an Israeli air strike in the Gaza Strip, and the Israeli army said it was targeting militants in Gaza in response to rocket attacks on Jerusalem and other areas, Reuters reports.

The Hamas militant group confirmed that its commander of the city of Gaza Bassem Issa was killed in today's Israeli air attack.

Gaza City commander Bassem Issa is the highest-ranking military figure in Hamas to be killed by Israel since the war in Gaza in 2014, the AP reported.

A statement from the armed wing of Hamas stated that Issa was killed together with several of his brothers, leaders and holy fighters, during the fighting that lasted for two days in Gaza.

JUST IN - Al-Shorouk Tower building in central Gaza collapsed after it was targeted by a series of Israeli missiles.pic.twitter.com/wG0osUWTCI

IDF combat soldier Staff Sgt. Omer Tabib of the Nahal Brigade, was killed this morning by an Anti-Tank missile fired by Hamas from Gaza into Israel. He was 21 years old.

May his memory be a blessing. pic.twitter.com/M3b3KXw4sP

The Al Qassam Brigades fired 15 missiles towards the city of Dimona. The city is located in the Negev region, 30 kilometers from the Dead Sea.#FreePalestine
pic.twitter.com/JDmIWh81Mv

The father of Palestinian man Abdulsalam Al-Ghazali, who was killed amid a flare-up of Israeli-Palestinian violence, reacts over his son's body during his funeral in Gaza City May 12, 2021. REUTERS/Mohammed Salem pic.twitter.com/aHdChc4A8B

A synagogue in Lod was burned in a massive pogrom conducted by Arab-Israelis. The Torah scrolls were saved, thank God.#Krystallnacht2021#IsraelUnderAttack #IsraelUnderFire#Pogroms pic.twitter.com/pBSTXhdnFz