Palestinian forces fired hundreds of rockets at Israel, which carried out strong air attacks on the Gaza Strip. The dead are being counted on both sides. 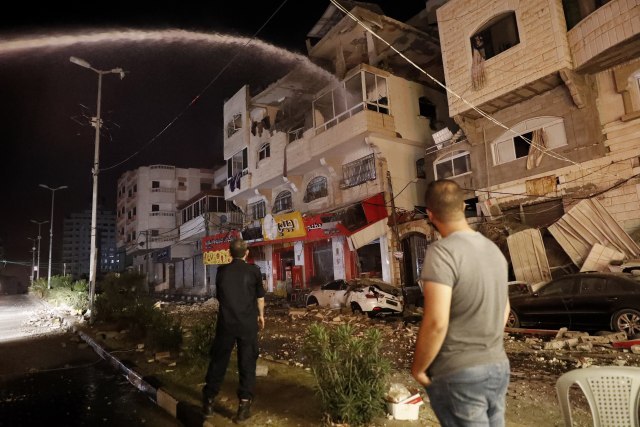 Clashes continue today, with at least 35 killed in Gaza and five in Israel.

Palestinian forces have confirmed that they fired hundreds of missiles at Tel Aviv after an Israeli air strike in the Gaza Strip, and the Israeli army said it was targeting militants in Gaza in response to rocket attacks on Jerusalem and other areas, Reuters reports.

A skyscraper apartment building in Gaza was demolished, and another was severely damaged after being hit several times in Israeli airstrikes.

Israel said its planes shot and killed several Hamas intelligence leaders this morning, and other attacks were aimed at other Hamas military targets.

Follow all the latest information from the Gaza Strip on our LIVE Blog.

The Palestinian ambassador to Serbia Mohammed Nabhan called on all "well-intentioned people" to put pressure on Israel to accept a peaceful solution, to start perceiving Palestinians as their neighbors.

He told Tanjug agency, on the occasion of the conflict that has been going on for two days, that Israeli planes are bombing mostly civilian settlements in Gaza and that 36 people have been killed so far, mostly civilians, 10 of whom are children.

Asked if there was a danger that it would turn into a bigger and longer-lasting conflict, he said that Palestine was trying to end the conflict and that no one was interested in it lasting for a longer period of time.

Hamas has fired an anti-tank missile at a vehicle in southern Israel. MDA teams are risking their lives rushing to the scene to provide medical aid while rocket sirens sound around them.
There are 3 casualties from the event and a helicopter has been mobilized. #IsraelUnderFire