Israeli and Palestinian ambassadors to Serbia clashed positions in Prva TV morning program, in the midst of the escalation of the conflict in the Gaza Strip. 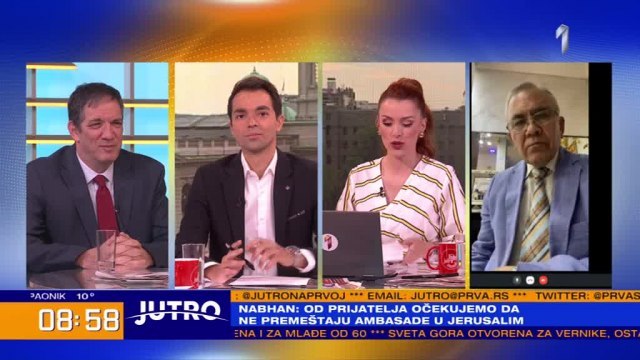 The clashes between the Palestinians and the Israelis have been going on for more than 48 hours, which have escalated into a very serious conflict, due to which an emergency session of the UN Security Council was convened. Rockets fly from both sides and hit targets, killing the civilians.

Palestinian Ambassador to Serbia, H.E. Mohammed Nabhan, who was the first to comment but also tried to explain what was happening in the Gaza Strip, from his point of view, said that it was a matter of a huge force attacking innocent people and unarmed people.

"It is not a fair competition. Israel, which is powerful and has the most modern weapons, is on one side, and people who have primitive weapons are on the other," he said.

It is not a fight over two equal things and that conflict did not start in Jerusalem two days ago, says Nabhan and adds that this conflict started much, much earlier. "Ask the ambassador of Israel, where his father was born. I was born in 1947 in Rakishi, which is a famous place. And the ambassador? His father came there and kicked my family and me out and took our house. It happens every day, and it is still happening today. People from all over the world have come and are expelling people from their homes", the Palestinian ambassador said.

"We tried, we signed an agreement with Israel to recognize each other, but they killed the man who signed that agreement with us, Isaac Rabin, and the right wing politicians came to power. The end is already known, and that is to return to the agreement that was signed, to create two states, one Palestinian-Arab and the other Israeli-Jewish. There is no third solution", Nabhan stressed, adding that no one will leave Palestinian territory.

"We are asking for 22 percent of what we had in 1948. They occupied the rest. We are not asking for theirs, nor to drive them away, but only what belongs to us. They are innocent victims. At the same time, they are bombing everywhere, not just us", Nabhan said.

Asked right at the beginning, where his father was born, Vilan said that it was not a topic now and "he is not sure that it was exactly like the Palestinian ambassador described". "My country is now bombed with over 800 rockets and I don't believe that the story of my father is of interest to your viewers now," he said and continued:

"Hamas is a terrorist organization that wants to expel Israelis from that territory, but not only us, they want to expel him as well, because Nabhan is a representative of the Palestinian government, not Hamas. Hamas is the one who kills and fires bombs. It is pure terrorism. They have committed a double crime, both against us and against them (Palestinians). He and I should be on the same side, against Hamas, which terrorizes Palestinians on a daily basis, not just Israelis," the Israeli ambassador said.

Vilan believes, like Nabhan, that negotiations should continue, but stresses that Hamas is not, nor will it be, a partner in those negotiations. "It is a terrorist organization and they are the enemies of the Palestinians themselves," Vilan added.

Response of the Palestinian Ambassador

"I disagree," the Palestinian ambassador said in the program. "Ethnic cleansing is taking place in Jerusalem. They want to evict people from our homes, bringing some people from all over the world. They are evicting people who have lived there for decades," Nabhan said.

According to him, the cause of the decades-long conflict is not Hamas, but the Israeli occupation of Palestinian territory in the West Bank.

Vilan replied: "When we bomb, we announce it"

The Israeli ambassador then asked the Palestinian, who was included in the program via Skype, while Vilan was hosted in the studio, "does he really think that the Hamas terrorist attacks are a way to return what they think should be returned to them."

"We are not saying that it is ours forever, but that we should negotiate and that is the only way to resolve the escalation of the conflict, not this one. Israel is 100 times stronger than Hamas and if we react with only one percent - Gaza would be razed to the ground, along with Hamas”, Vilan said.

According to him, when the Israeli army shells the territory that it considers to be under the control of Hamas, it first announces two hours in advance, so that people can take shelter, while, he further points out, Hamas shells without warning.