The new President of the United States of America, Joe Biden, entered the White House, for the first time since he assumed the office of the U.S. President. 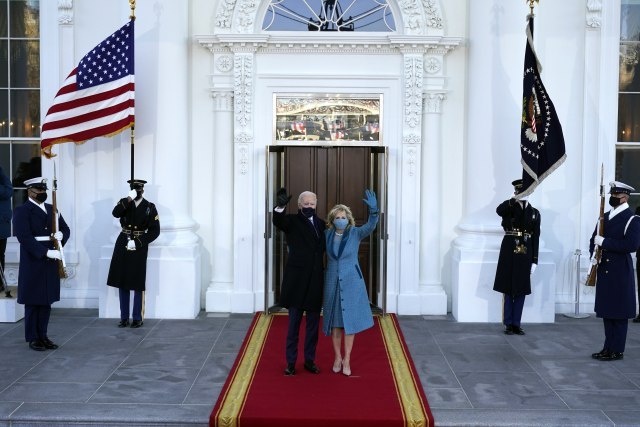 He was greeted by a military band as he passed by with his wife and first lady Jill Biden.

The orchestra played "Greetings to the Boss" and "God Bless America" as the couple officially entered.

The first thing Biden will find in the Oval Office will be a letter left to him by his predecessor Donald Trump.

The letter is in the same place where Trump found it when he took office from Barack Obama. Biden met with reporters today at the entrance to the White House. He and his wife, Jill Biden, got out of their official vehicle, an armored Cadillac with license plates "46", and met with accredited reporters from the residence of the US president at the entrance to the White House.

"Keep up the good work," Biden told representatives of the media, as CNN reports.

Just to recall, Joe Biden signed the first three documents today in the Presidential Room at the Capitol as President of the United States.

The eyes of the whole world were diverted to Washington DC after the incursion into the Congress, the request for Trump's impeachment and the National Guard, which flooded the streets of that city.

How dangerous is it that the country that is considered to be the world's greatest power is in crisis, how will the newly elected President Joseph Biden approach the world, and what can the Balkans and Serbia hope for in all this?

President Biden has finally arrived at the White House. pic.twitter.com/MLorqizYIV

"Today on this January day, my whole soul is in this — bringing American people together, uniting our nation, and I ask every American to join me in this cause," Biden said in his inaugural speech.

"Today, we celebrate the triumph not of a candidate, but of a cause, the cause of democracy. The will of the people has been heard and the will of the people has been heeded. Over the centuries through storm and strife, in peace and in war, we have come so far. But we still have far to go. We will press forward with speed and urgency, for we have much to do in this winter of peril and possibility", President Biden said.

Joe Biden arrives at the White House for the first time as US president. pic.twitter.com/DDU2zGCJ4o

The statement from the White House

The White House published a tweet in which they say that Biden is taking over the president's office at a time when "our nation is facing a crisis and demands urgent action."

"Starting today, the President will take decisive actions to address these challenges, prevent other harms, and restore America's place in the world".