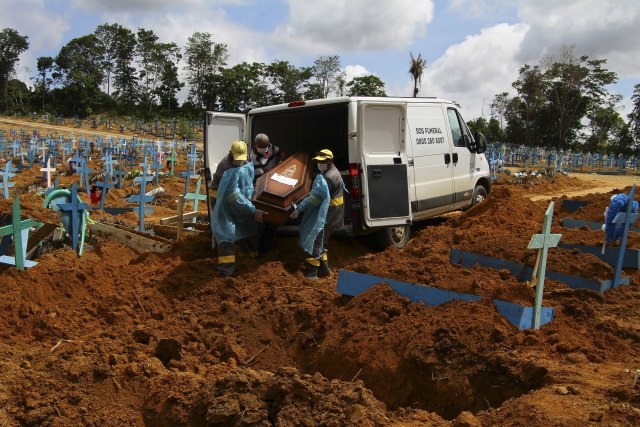 He also stated that an entire hospital wing of the patient died after he ran out of oxygen for respirators, reports the "Guardian".

The governor Lima announced the curfew from 7 pm to 6 am in the morning.

Manaus, the largest city of the Brazilian state of Amazonas, was one of the places most affected by the first wave of the epidemic last April, and the authorities were forced to dig mass graves for the dead, according to the British paper.

"We are in a state of extreme catastrophe... like a country at war - experiencing defeat," Lima said at the time.

According to the "Guardian", on December 22, there were 39 funerals in the entire city of Manaus, while on Wednesday, a new record was broken for the fourth day in a row with 198 funerals. There were 130 funerals on Saturday, 144 on Sunday, 150 on Monday, and 166 on Tuesday, the London paper added.

"These figures show crystal clear that we are witnessing an explosion of COVID-19 mortality that is even higher than the one from the first wave," Lima said.

Reports in the Brazilian media on Thursday say that several public hospitals were completely left without oxygen.

State officials have announced they will begin evacuating some patients to other states for treatment.