The US House of Representatives has impeached President Donald Trump for "incitement of insurrection" at last week's Capitol riot. 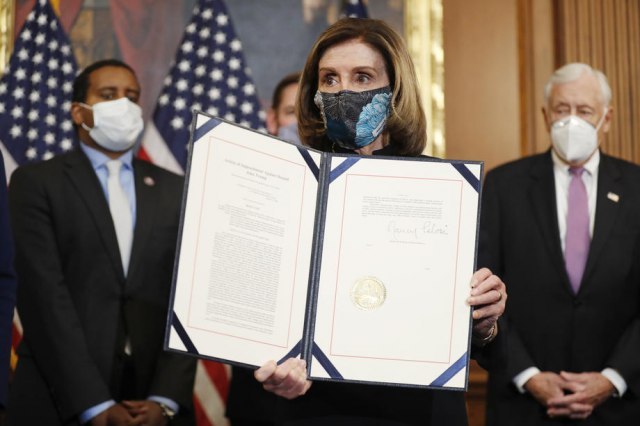 Trump was impeached for abuse of power and obstruction of Congress.

The House of Representatives of the American Congress accepted the resolution by which the Vice President of the USA, Mike Pence, is asked to invoke the 25th Amendment to the American Constitution and take over the presidential powers from President Donald Trump.

The article of impeachment stated that Donald Trump "repeatedly issued false statements asserting that the presidential election results were fraudulent and should not be accepted".

It says he then repeated these claims and "willfully made statements to the crowd that encouraged and foreseeably resulted in lawless action at the Capitol", leading to the violence and loss of life.

223 congressmen voted for the resolution proposed by the democratic congressmen, while 205 of them opposed it, Sputnik reported.

Ten Republicans sided with Democrats to impeach the president by 232-197.

He is the first president in US history to be impeached twice, or charged with crimes by Congress.

In a video released after the vote in Congress, Trump called on his followers to remain peaceful but he did not refer to the fact that he had been impeached. "Violence and vandalism have no place in our country... No true supporter of mine would ever endorse political violence," Trump said.

The article of impeachment has been placed on the desk for the engrossment ceremony with Speaker Pelosi. pic.twitter.com/zCSfGXtdWK