Four people were killed and 52 were arrested after supporters of President Donald Trump stormed the Capitol building. 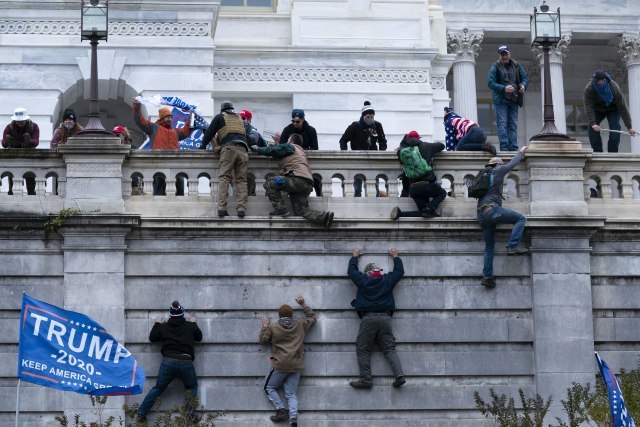 Former U.S. President George W. Bush compared the scene at the U.S. Capitol Wednesday to that of a banana republic: "This is how election results are disputed in a banana republic - not our democratic republic."

The protesters tried to prevent Congress from confirming Joe Biden's victory in the presidential election, said the chief of police in Washington.

City police chief Robert Jay Contee said at a press conference that 47 of the 52 arrests made were related to the violation of curfew, which was introduced at 6 p.m. As he stated, 26 people were arrested on the ground of Capitol Hill, where the US Congress is located, Reuters reports.

The others were arrested on charges of carrying a firearm without a license or which is prohibited.

Chief Contee said during a press conference Wednesday that officers found two pipe bombs, one outside the Democratic National Committee and one outside the Republican National Committee. Federal law enforcement says both were real explosive devices and were rendered safe. Also, a refrigerator was found in the vehicle on the ground of the Capitol, which contained Molotov cocktails.

Contee did not want to identify the woman who was hit and killed by the police, but he said that three more people died due to "urgent health condition".

14 police officers were injured in the riots, two of whom were hospitalized.

It is unknown at this time whether there have been any additional arrests.

The US Congress continued the session at which the result of the presidential elections on November 3 should be confirmed, which was interrupted when hundreds of supporters of President Donald Trump stormed the Capitol building - the symbol of American democracy.

Shocking scenes in Washington, D.C. The outcome of this democratic election must be respected.

Numerous world officials on social networks also reacted to the events in Washington.

They mostly conveyed that they were surprised, worried and shocked by the current events and gave their support to President-elect Joe Biden.

NATO Secretary General Jens Stoltenberg stated that he was shocked by the scenes in Washington and that the outcome of the elections must be respected.

"Shocking scenes in Washington, D.C. The outcome of this democratic election must be respected," he wrote on Twitter.

The President of the European Parliament, David Sassoli, said that he was worried about the scenes he saw.

"Deeply concerning scenes from the US Capitol tonight. Democratic votes must be respected. We are certain the US will ensure that the rules of democracy are protected," he also wrote on this social network.

Spanish Prime Minister Pedro Sánchez said that he believes in the strength of America's democracy and that he believes that President-elect Joe Biden will overcome this time of tension and unite the American people .

I am following with concern the news that are coming from Capitol Hill in Washington. I trust in the strength of America's democracy.
The new Presidency of @JoeBiden will overcome this time of tension, uniting the American people.