Although the US Congress building is closed to visitors since the outbreak of pandemic, thousands of Trump supporters have surrounded the building at the moment 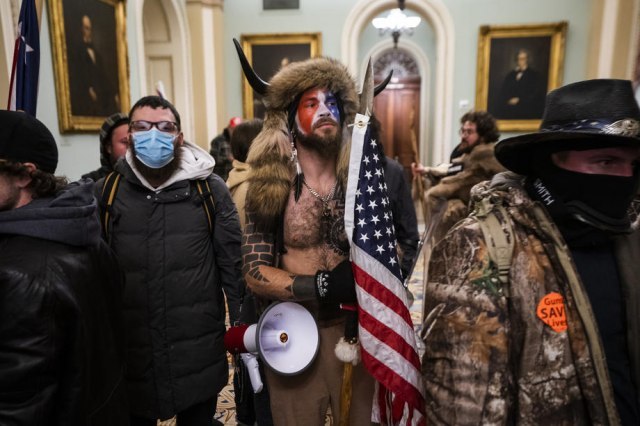 They broke through the police cordon in front of the main stairs at the entrance and enter the parliament building.

The CNN report states that it has never happened before that protesters enter the Congress building and warn that the situation is out of control and that the protesters are preventing the normal procedure of confirming Joe Biden's election victory in the presidential elections.

Police are deploying additional forces and trying to bring the situation back under control.

CNN reports that President Trump took to his Twitter account one hour after the escalation of the protests of his supporters and the incursion into the Congress.

"Please support the police and security services. They are truly on the side of our country. Stay calm," the current US president said.

Trump to protesters: We love you, you are special

A message for Nancy

One of Trump's supporters, who broke into the Congress building tonight, entered the office of the Speaker of the House of Representatives, Nancy Pelosi, and left her a message: "We will not back down." He posed for photojournalists reclining in her armchair with his legs raised on a table, and wrote the message on a folder.

Congress leaders are being evacuated and transferred to a military base

Congress leaders are being evacuated from the Capitol complex and will be escorted to the nearby McNair Army Base in Washington DC, as CNN reports. A federal police official told CNN that the evacuation was underway. For now, it is uncertain when the session in the U.S. Congress will continue, at which the victory of Joe Biden in the presidential elections in the United States should be confirmed.

One person shot inside the Capitol

One person was shot inside the Capitol after a mob of Trump supporters breached the building, the police in Washington, D.C., said on Wednesday. More information about the person or their condition was not immediately available.https://t.co/K1bDp5fHhA