The start of the "world revolution": Citizens protest VIDEO

Europe is tightening the measures due to the coronavirus pandemic. Curfew is introduced, masks are mandatory while the number of infected and dead is growing. 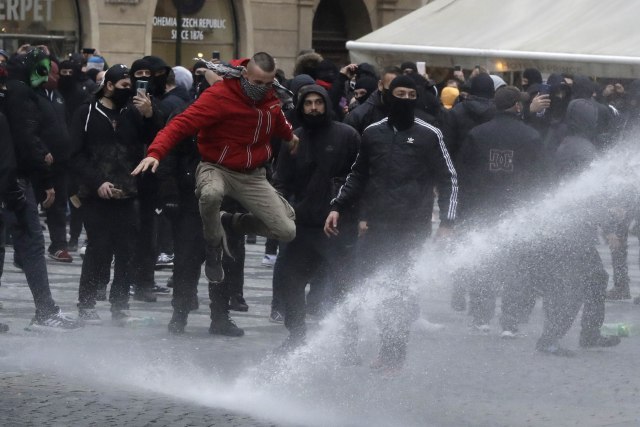 On the other hand, there are those who do not like the restrictive measures introduced by the authorities to prevent the spread of coronavirus. They take to the streets, demonstrate and clash with the police because they do not want a new round of lockdown.

Pictures from Prague went around the world last week. Czech police used tear gas and water cannons to disperse hundreds of protesters who attacked police officers and threw bottles, rocks and other objects at them. At least 20 people were injured in those clashes.

Thousands of people attended the protest, including football and hockey fans who protested against measures including a ban on sports competitions and the closure of bars and restaurants.

It is also forbidden to gather more than six people, but it is allowed to gather up to 500 people, if they are divided into groups of 20 and if they wear protective masks. Many protesters did not wear masks.

Montenegrins also rose up against government measures. According to Sputnik, Cetinje's caterers blocked the roundabout towards Podgorica and Budva on Monday, in protest of the order of the National Coordination Body (NKT) which closed the catering facilities in that city.

As the representatives of the caterers said, if NKT does not reconsider its decision, the blockades will follow every evening from 7 to 9 p.m.

They also warned that about 2.000 people would lose their jobs by closing the bars and restaurants.

In the midst of curfew, which has been in force in Paris since Sunday due to new measures against coronavirus pandemic, an unreported protest was organized against the new restrictions.

In the Paris region, as well as in eight other French regions, a new curfew measure has been introduced, which will last from 9 pm to 6 am every day for the next four weeks.

Protesters threw trash cans on the street, and after about thirty minutes, the police managed to force the gathered to disperse, according to French media.

A revolt against the corona measures also broke out in Great Britain.

Quarantine fighters moved along Oxford Street, one of the world's busiest shopping streets. The demonstrators believe that the restrictions imposed due to COVID-19 are unnecessary and constitute a violation of their human rights. Some oppose wearing masks and vaccinations.

Some of the demonstrators carried banners that read: "My body - my choice, NO to the mandatory masks".

British authorities have closed pubs and bars in areas in the north of England, while limited gatherings in London and other parts of the country are in force.