Greeks erect giant fence along border: It will be surrounded by barbed wire PHOTO

Greece started with the erection of a 27-kilometer-long steel railings, along with military observatories in Evros, on so-called main point Balkan migrant route 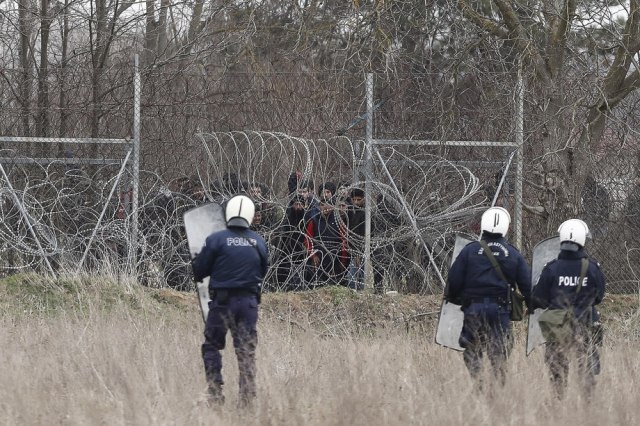 A fence is "sprouting" on the borders of Greece and Turkey.

In terms of height, which is five meters, this fence will surpass other fences in such places in Europe, as well as on the border between the USA and Mexico. It will also be surrounded by barbed wire.

"Raising the fence in Evros is the least we could do to secure the border and make the inhabitants of Evros feel safer," Greek Prime Minister Kyriakos Mitsotakis said on October 17 during a tour of the region.

The new barriers will serve to prevent illegal border crossings and floods, while 63 million euros have been invested in that project.

In addition to the construction of the new one, the network of existing fences with steel reinforcements in the height of 4.3 meters will be improved, which is in the rank of a barrier such as the one on the border between the USA and Mexico.

The Greek government has hired an additional 400 border police to guard the Evros region, 800 in the eastern Aegean and 480 in other parts of the Hellenic Republic, the Balkan Security Network writes, Sputnik reports.

This is not an installation #fortresseurope #evros #Greece_Turkey borders
Greek #Apartheid pic.twitter.com/eHM7Kv2jqt

It should be noted that the conflicts on the border between Turkey and Greece culminated during February.

Migrants tried to enter Greece - and the EU, after Ankara reduced its control, i.e. it decided not to stop refugees from Syria who are trying to reach Europe by land and sea.

Various speculations arose then, and information with videos was circulating on social networks, where it is stated that Turkey provides buses for migrants and sends them to the border crossings with Greece and Bulgaria.