Protesters in Kyrgyzstan stormed government and parliament buildings and released former president and prime minister from prison. About 590 people got injured. 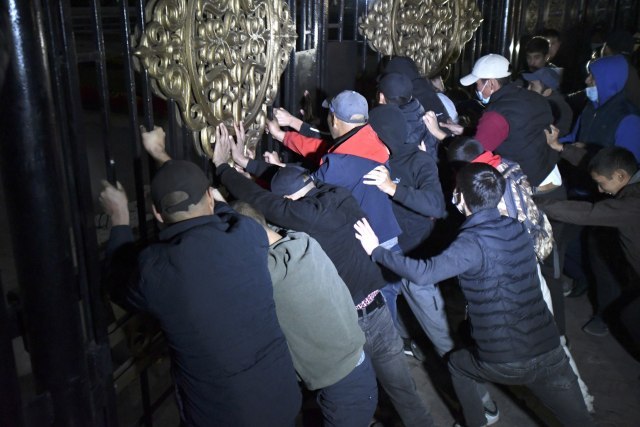 Riots broke out in the Kyrgyz capital, Bishkek, over election results. The police charged the protesters and used rubber bullets, tear gas and water cannons, but the citizens of Bishkek was "superior" and stormed the building.

TASS reports a statement from the Ministry of Health, according to which 590 people were injured in the conflicts with the police that preceded the incursion into the parliament, of which 150 were hospitalized. Also, 190 members of the security forces were injured.

Parliamentary elections were held on Sunday, and as soon as the preliminary results came out, the rest of the opposition forces, which failed to win, took to the streets of Bishkek and chaos ensued.

Protesters then released former President Almazbek Atambayev and Prime Minister Sapar Isakov, who is in another city, from prison.

World agencies also reported that a fire broke out in the "White House", which was quickly extinguished.

The "released" Atambayev is expected to address the public tonight.

The agency estimates that today's events are a clear sign that the official president Soornobay Jeenbekov is losing control over the state.

Atambayev was sentenced to many years in prison for corruption, after a conflict with his successor Sooronbay Jeenbekov.

Atambayev, who was president from 2011 to 2017, was arrested in August last year.

He is accused of using force against police miscreants, organizing mass protests, murder and attempted murder, hostage-taking and other crimes, including corruption.

Protesters released former Prime Minister Sapar Isakov, who led the government in 2017 and 2018, from the penal colony in the village of Moldovanovka.

In Sunday's election, the Birimdik (Unity) party, led by supporters of President Sooronbay Jeenbekov, won 24.45 per cent of the vote, according to unofficial results released by the election commission.

Immediately behind it is the party Mekenim Kyrgyzstan (Homeland) with 23.95 percent of the votes, whose list includes former members of the coalition and former opposition MPs.

Riskeldi Mombekov, the opposition candidate in the presidential election from the Ata Mekan party, said that the president promised fair elections, but did not keep his word.

In a country of 6.5 million people, political instability often occurs. In the last 15 years, two presidents have been overthrown in riots, and the third is in prison after breaking up with his successor.