Chaos in Minsk - there are casualties VIDEO / PHOTO

Belarusian police used tear gas and rubber bullets to break up a protest held in Minsk for the second night in a row after the presidential election. 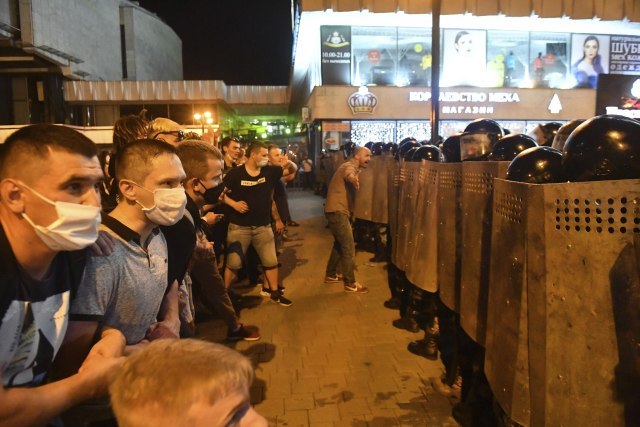 Several thousand demonstrators gathered on the streets of the capital with opposition representatives, and many played music and carried flags from cars.

According to the reporter of that agency, the police used tear gas and rubber bullets, and one journalist was injured.

A protester in Minsk was killed after a bomb he was carrying exploded in his hand, reports the TASS agency.

Explosions are heard in the center of Minsk, reports the correspondent of Sputnik. A bus was set on fire by a torch.

During the conflict with the special forces, one person was killed when he tried to throw an explosive device at them, the police said. However, the explosive activated in his hands.

A long line of special forces vehicles is moving in the direction of this part of the city. However, they were blocked by citizens' cars.

Belarusian police arrested at least 19 people today during a riot of the protesters, who gathered in Minsk for the second day in a row, Reuters reports, citing an unnamed witness.

On Sunday evening, after the first results of the presidential elections in Belarus were announced, there were protests during which the protesters clashed with the police, and 3.000 participants got arrested.

In those elections, President Alexander Lukashenko won his sixth term, winning with 80.08 percent of the vote.