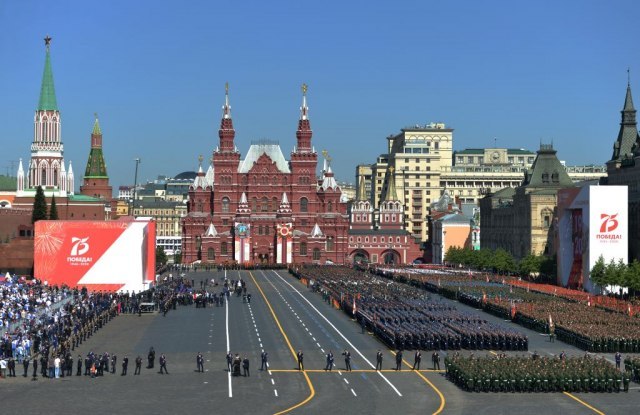 Representatives of delegations from numerous countries are also attending the parade, including the President of Serbia, Aleksandar Vucic. Today, on the eve of the beginning of the Military Parade in Moscow, he arrived in the Kremlin, where he was welcomed by the President of Russia, Vladimir Putin.

Before the display of weapons and equipment and the parade of members of military units, Russian President Vladimir Putin addressed the public.

As announced, about 14.000 people will take part in the 75th parade in a row, and Russian Defense Minister Sergei Shoigu said earlier that Russia had invited soldiers from 19 countries to take part in the parade on Red Square. 225 units of weapons, military and special equipment will be shown at the parade, and 75 planes will also take part in demonstration aviation exercises.

The Guard of the Serbian Army also presented itself at the parade. ﻿

After the parade, Presidents Putin and Vucic and other heads of the delegation will walk to the Alexander Garden, where they will lay flowers together at the monument to the Unknown Hero.

Due to the epidemiological situation, the citizens will follow the event on television. The parade was previously postponed due to the coronavirus, and the President of Russia chose June 24 as the new date, the day when the first Victory Parade was held in Moscow 75 years ago, led by Marshals Zhukov and Rokossovsky on Red Square in front of the Kremlin.