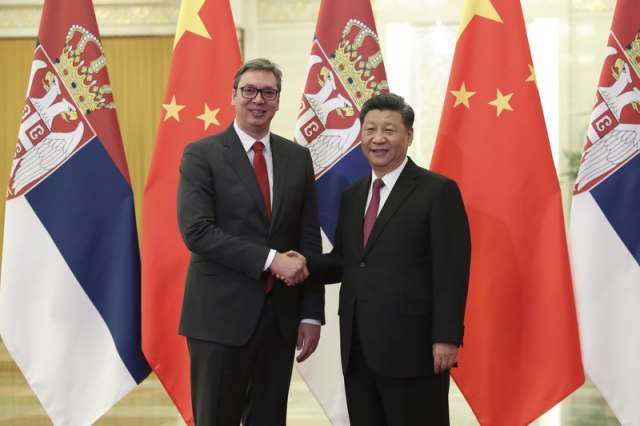 President Vucic thanked the People's Republic of China on its decision to offer Serbia assistance in stopping the infection, as well as for brotherly care for the citizens of our country.

"When the first airplane landed on the Belgrade airport on March 21 with great Chinese aid in medical equipment and supplies, accompanied by Chinese experts, new optimism awakened, and the citizens of Serbia knew that they were not and will not be alone in this fight", President Vucic said.

He also thanked for the donation in the form of two COVID-19 laboratories operating in Belgrade and Nis, which will undoubtedly contribute to Serbia's successful fight against the virus, and asked President Xi to help Serbia acquire the necessary medical equipment needed in fighting the virus.

President Vucic emphasized that Serbian citizens are particularly touched by the enormous interest and solidarity of the Chinese people, reflected through messages of support as well as through donations sent through Serbian diplomatic missions in Beijing and Shanghai, which speaks of the exceptional closeness and steel friendship of the two nations, despite the geographical distance.

"We are pleased to hear the news of the normalization of the situation in China and the opening of the city of Wuhan, which has become a symbol of strength and courage in the fight against the pandemic. "China and its Communist Party waged victory over a powerful coronavirus," said President Vucic, on behalf of the citizens of Serbia and in his personal name, expressing condolences to the families of deceased Chinese citizens.

He stressed that he believes that with the help of a powerful Chinese state, Serbia and the world will defeat the coronavirus and stressed that he looks forward to continuing cooperation through Mechanism 17 plus 1 and the Belt and Road initiative, as well as the Chinese President's upcoming visit to Serbia.

President Xi expressed hope that he would see President Vucic in China soon, and he also confirmed his official visit to Serbia.

The Chinese President wished the Serbian President personal happiness and continued success in running the country, adding that China and Serbia would be able to overcome all the economic difficulties they will face as a result of the pandemic crisis.