1,000 specialist police officers have been dispatched to the border with Greece

Ankara deployed around 1,000 specialist police officers to stop the Greeks from pushing migrants back to Turkey, Turkish Minister of Police ‎Süleyman Soylu said 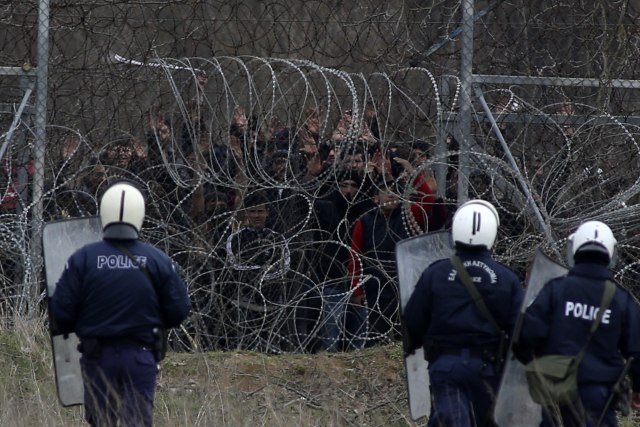 Ankara today announced it was deploying 1,000 specialist police officers to stop the Greeks from pushing the refugees back.

Greek border guards rebuffed nearly 7,000 attempts in the last 24 hours alone, taking the total since February 29 to 34,778 and the number of arrests of those who got through to 244, the Greek government sources said.

Speaking to reporters in the northwestern border province of Edirne, Turkish Minister of Interior Soylu said Greek police had wounded the scores of migrants trying to cross the border.

"A total of 139,070 refugees moved from Edirne to Greece. They wounded 164 people. They tried to push 4,800 people back to Turkey," he said. "We are deploying 1,000 special force police to the border system to prevent the push-back", NTV reported.

According to him, news from Greek authorities and the media about the number of refugees arriving from Turkey to Greece is incorrect, Sputnik reports.

It comes after Trukey chose to act on its threat to no longer abide by a 2016 deal with the EU to halt illegal migration flows to Europe in return for billions of euros in aid.

Germany does not want to host migrants from Greece

The Bundestag has overwhelmingly rejected the Greens' request to accept 5,000 refugees from vulnerable groups from the Greek islands, reports German "Bild".

The Greens demanded that 5,000 refugees be transferred from overpopulated Greek islands to Germany, including unaccompanied minors, pregnant women or women traveling alone, first, with 117 votes cast, and 495 against.