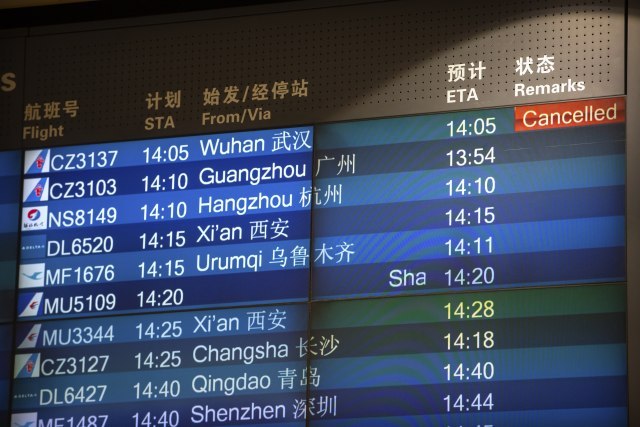 Another 393 people are suspected of being infected with the virus, but this has not yet been confirmed, Reuters reports.

Wuhan’s city government said it would shut down all urban transport networks and suspend outgoing flights.

Wuhan authorities have urged citizens not to leave the city unless under special circumstances, while heavy guards patrol Wuhan's main roads.

Of eight known cases worldwide, Thailand has confirmed four, while Japan, South Korea, Taiwan and the United States have reported one each.

In Washington, there are 16 people who have been in contact with the coronavirus patients, who are currently under medical observation.

During a visit to Wuhan, Vice Premier Sun Chunlan said authorities needed to be open about the virus and efforts to contain it, the official Xinhua news agency said.

Some experts believe the new virus is not as dangerous as previous coronaviruses such as SARS (Severe Acute Respiratory Syndrome), which has killed more than 700 people since 2012.

There is no vaccine for the virus, which can spread through respiratory transmission. Symptoms include fever, difficulty in breathing and cough, similar to many other respiratory illnesses, and could cause pneumonia.

The previously unknown virus strain is believed to have emerged late last year from illegally traded wildlife at an animal market in China’s central city of Wuhan.

Japan is facing with the increased risk of new viruses, and citizens are advised to cancel trips to non-urban areas.

The World Health Organization (WHO) has said it will decide on Thursday whether to declare the outbreak a global health emergency, which would step up the international response.

If it does so, it will be the sixth international public health emergency to be declared in the last decade, Reuters reported last night.

WHO Director-General Tedros Adhanom Ghebreyesus called on China to take “more and significant measures to limit or minimize the international spread”, adding: "I take this decision extremely seriously, and I am willing to bring it only after thorough consideration and information available".

He gave such statement following yesterday's meeting of an independent panel of experts organized by WHO in Geneva.