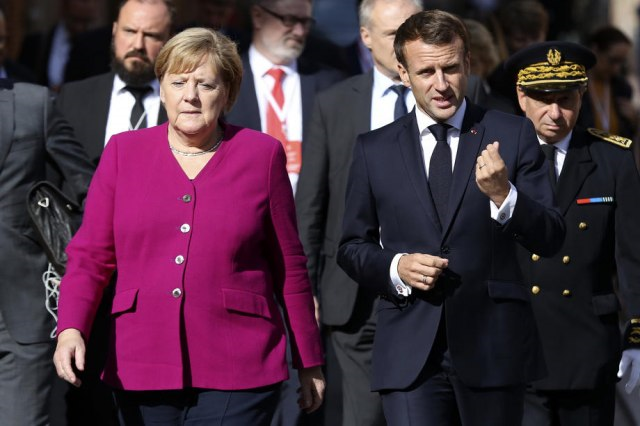 On the sidelines of celebrating the 30th anniversary of the fall of the Berlin Wall, the German Chancellor was in sharp private criticism of a colleague, according to the "New York Times".

"I understand your need for a disruptive policy. But I got tired of collecting shattered pieces. I have to glue the cups you broke all the time, just so we can sit down and have a cup of tea", uncommonly angry Angela Merkel said to Macron.

In an interview with "The Economist", French President concluded that NATO had suffered a "brain death" due to a lack of agreement, and Merkel had immediately dismissed his claims as exaggerated.

When it comes to the European Union, Macron recently vetoed the start of accession negotiations with Albania and North Macedonia, though both countries launched tough reforms to meet the criteria, while North Macedonia even changed its name at the request of neighboring Greece, "New York Times" recalls.

The talks between the two leaders highlight the strained relations between France and Germany, as well as tensions over a shortened NATO meeting in the suburbs of London, which has been carefully lowered from the summit level to the leaders' summit in celebration of the Alliance's 70th anniversary.

"The relations between France and Germany have not been so bad in a long time. I have almost never experienced such outrage and misunderstanding", Claudia Major, Senior Associate at the German Institute for International and Security Affairs (SWP) concluded.

As an ambitious French President with almost royal powers, Macron is increasingly losing patience over the slow pragmatic approach of Angela Merkel, German federalism and the coalition government, Major observes.

His desire, "in his impatient and almost nervous way," to "lead and disrupt" opposes the German system, which has been slowed down during Angela Merkel's last term and at the point in time when the coalition is thriving to survive, she added.

After Macron's criticism, Germany will put NATO's political deal to the test, according to the "New York Times", recalling that German Foreign Affairs Minister Heiko Maas (SPD) proposed the introduction of an expert commission to be headed by Secretary General Jens Stoltenberg at a NATO meeting in Brussels on Wednesday, which would substitute for "the lack of political discussion in the alliance".